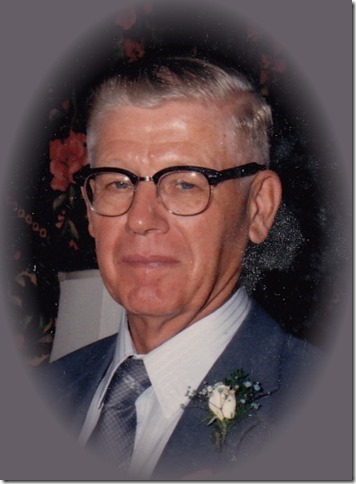 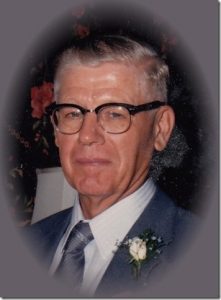 W. Wayne Hodges
William Wayne Hodges, age 97, of Kahoka, MO, passed away peacefully early Sunday morning, August 5, 2018 at the Clark Co. Nursing Home in Kahoka.
Wayne was born August 22, 1920 at Neeper, MO, a son of John Leo and Ruby Ellen Wells Hodges.
He married Mildred Ida Rhode on December 31, 1943.  She preceded him in death on January 13, 1986 and they were the parents of Ronald, Scott, Tedd and Debbie.   On August 28, 1988 he married Grace Brown Campbell.  She preceded him in death on August 3, 2018.
Survivors include his children: Scott (Rickie Beth) Hodges of Circleville, OH, Tedd Hodges of Wyaconda, MO and Debbie Steinmann of Springfield, MO; Grace’s children and their families: Jerry Lee (Mary) Campbell of Alexandria, MO and John Edward (Debbie) Campbell of Wayland, MO; brother-in-law, Harry Wesley (Sharon) Brown of Keokuk, IA; fifteen grandchildren: John Hodges of Hope Mills NC, Ellen (Daren) Muzzy of Middlebury,VT,  William Hodges of Brandon, VT, Kristen (Stewart) Alpert of Gilroy, CA, Matthew (Kathy) Mears of Tallahassee, FL, Karri Brooks of Melissa, TX, Sarah (Todd) Grace of Athens, OH, Millie (Chris) Lapos of Bloomsburg, PA, Jill (David) Plenge of Luray, MO, Daniel (Sarah) Hodges of Wyaconda, MO, Audrie (Brad) Howe of Kahoka, MO, Gina (Seth) Ogle of Wyaconda, MO, Isaac (Sarah) Hodges of Wyaconda, MO, Erica Vogt of Hope Mills, NC, and Andrew (Catrina) Steinmann of Joplin, MO; thirty-four great grandchildren; and one great-great grandchild; as well as nieces, nephews, and other relatives.
He was preceded in death by his wives; one son, Ronald W. Hodges, step-son, Harold Raymond “Bub” Campbell and his wife, Joyce; a grandson, Thomas Hodges; and a grand-daughter, Melanie Steinmann.
Wayne graduated from Ballard High School.  He attended Kirksville State Teacher’s College and received his Master’s degree in Business and Administration in Tennessee.
Wayne entered the U. S. Navy in 1942 and was a Navigation Instructor at the Midshipman’s School at Northwestern University in Chicago.  Following his discharge, Wayne taught in the Union and Beard schools and taught and served as Principal at Wayland, all in Clark County, MO.   He then went to work for FSA, retiring as Executive Director after 32 years of employment.
Wayne also farmed all of his married life and had a strong desire to rebuild the farm his ancestors had lost, working diligently going to school, home to eat, and then work on the farm until the day was long over.  Although he worked hard, he also had a playful side and loved to visit and share his good nature with others.
Wayne was a long-time member of Cedar Grove Baptist Church as well as deacon and Sunday School teacher for over 60 years.  He also served as treasurer for the Pleasant Grove Association for many years.   He was an active member of the Gideon’s and had a faith that could move mountains.  He traveled on mission trips often three or four a year to deliver clothing and other items to the Indians in Rapid City, SD.
Funeral services were held Wednesday, August 8, 2018 at 11 a.m. at Wilson Funeral Home in Kahoka with Pastor Shawn McAfee officiating. Special music was “”There’s a Wideness in God’s Mercy” and congregational  hymns, “The Old Rugged Cross” and “Victory in Jesus”.
Honorary Pallbearers were Dean Webster, Wayne Blum, Gary Trump, Robert St. Clair, Harold Trump, Marvis Trump, LaVola Hobson.
Visitation was held at Wilson Funeral Home after 9 a.m. Wednesday with family receiving friends from 9:30 a.m. until services at 11. Cremation followed with inurnment to be held in the Cedar Grove Cemetery in Kahoka on September 23, 2018 at 10:30 A.M.  Friends are invited to attend.  Inurnment will also be held  at the Oakwood Cemetery in Hamilton, IL at a later date.
Memorials are suggested to the Missouri Baptist Children’s Home.
On-line condolences may be expressed at www.wilsonfuneralservice.com.
Posted in AREA OBITUARIES