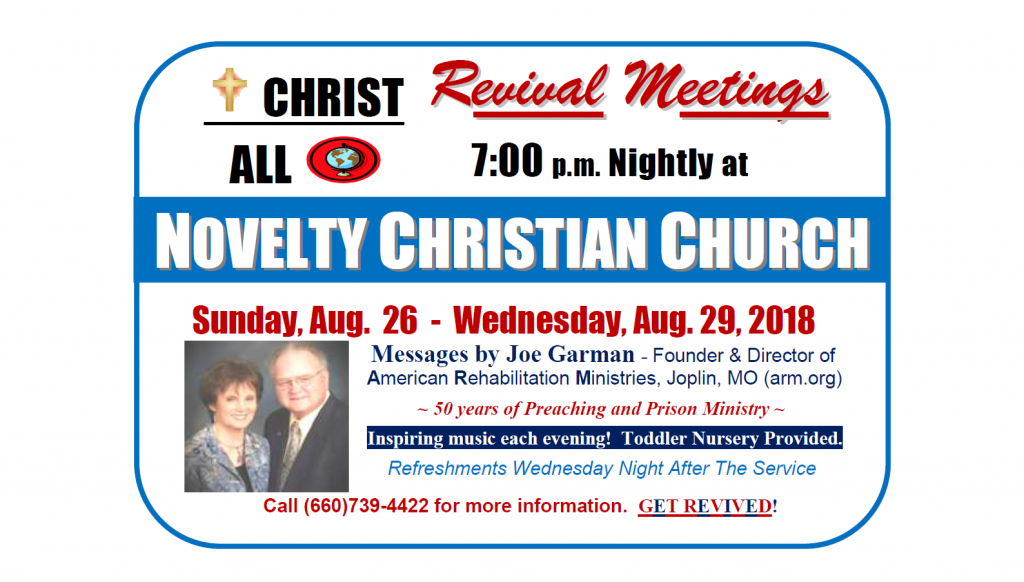 The family of the Novelty Christian Church are opening wide their doors to welcome all to attend revival services held Sunday, August 26 and going through Wednesday, August 29, 2018, nightly at 7:00 p.m. Joe Garman, the founder of ARM (American Rehabilitation Ministries) located in Joplin, Missouri, will bring the message each night. Brother Garman has spent the last fifty years preaching and taking the Gospel of Jesus Christ to those who are in prison. ARM began ministering to prisoners in the United States in 1973 when there were about 243,000 people incarcerated.

Today, ARM ministers domestically to more than 1.2 million people incarcerated in America’s 1,500 state and federal prisons and another half-million occupying the nation’s 3,200 jails. In 2001, ARM expanded its efforts internationally by going into a prison in Mexico, then expanding to Africa, India and Russia. Later, branch ministries were added in Cambodia, Thailand, South Korea and the Philippines. Today, ARM takes the Gospel into jails and prison cells on six continents and it has five international branch ministry locations.

Joe Garman is a graduate of Ozark Christian College in Joplin, Missouri. He and his wife were serving as missionaries to Korea in 1969, when a U.S. Military Chaplain told them about four American servicemen incarcerated in a Korean prison. A great love for these American prisoners developed and Joe began going to the prison to visit them on a regular basis. The warden subsequently asked Joe if he would also consider visiting Korean prisoners. Word quickly spread that an American Missionary was willing to minister to Korean prisoners and Joe found himself in full-time prison and reformatory ministry throughout the Republic of Korea, commonly known as South Korea.

Plan to attend the nightly services where you will hear inspiring music, will learn more about this amazing ministry (ARM) and will hear the Gospel of Jesus Christ preached boldly each evening. Toddler nursery services will be provided.