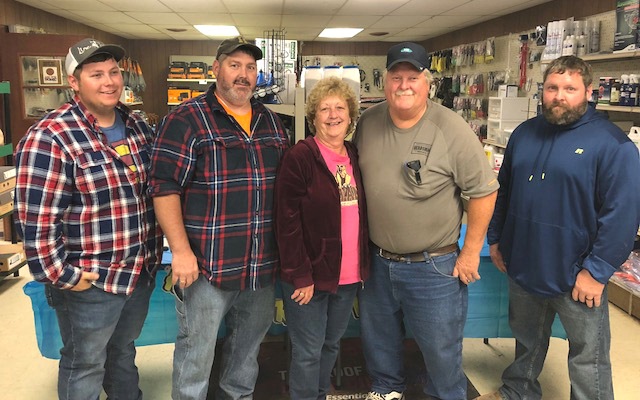 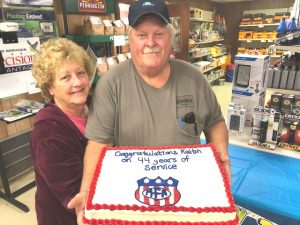 PARRISH RETIRES – Keith Parrish, of LaBelle, seen with his wife, Sharon (Edwards) Parrish was honored with a luncheon reception on Friday, September 28, 2018, upon the occasion of his retirement after more than four decades of employment with MFA in LaBelle, Missouri. 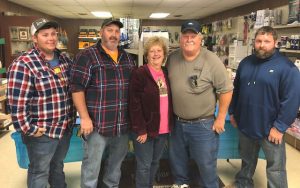 FAMILY ATTENDS RECEPTION – The Keith Parrish family (l-r) Nathaniel, Chris, Sharon, Keith and Justin Parrish together at the MFA Exchange on Friday, September 28, 2018, in celebration of Keith’s work ethic displayed during the more than 44 years of employment with MFA in LaBelle, Missouri.

The work relationship began on September 1, 1974, between Keith Parrish and MFA Seed Division in LaBelle. In late 1977, Parrish  transferred to the fertilizer plant.  Paul Hubble was the manager at the time.  About 1984, Parrish made his way to the MFA Exchange where he worked in feed sales, farm supplies, animal health and product delivery, to this day more than 44 years later, his retirement day, September 28, 2018.

Having grown up in Knox County, Missouri, Parrish married a Lewis County girl, Sharon Edwards.  The couple settled in LaBelle, and started their family which now includes, sons, Chris, Shawn and Justin, daughters-in-law and grandkids.

When asked what he plans to do with all of his time now that he is retired, Keith shook his head and replied, “I just don’t know.”

It is a likely possibility that keeping up with the grandkids and their activities will be high on the list.