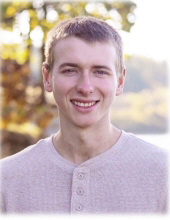 Zachary Tyler Snelling, 22, of Brashear, Missouri, passed away Sunday, October 7, 2018, at his home in Brashear.
Zach was born June 26, 1996 in Kirksville, Missouri, to his parents Tony and Erin Humphrey Snelling. His blonde hair and blue eyes lit up their lives from the time he was born. Zach was baptized in Memphis Missouri at a young age.
After attending and graduating from Knox County High School in Edina, Missouri, in the Class of 2015, Zach began school at the Missouri Welding Institute in Nevada, Missouri. He completed this program with honors, earning all of the welding certifications and was selected as “student of the month.”
Zach has been a hard worker all of his life. He started at a young age helping out with farming and fence building with his parents and siblings. He became a skilled mechanic, precise fence builder, and a meticulous welder.
In 2016, after graduating MWI, Zach opened Snelling Welding and Steel Sales in Brashear, Missouri. He owned and operated his shop until the time of his death. In addition to his self employment, he also worked full-time doing custom welding jobs.
In his free time, Zachary enjoyed hunting, fishing, derby racing and having a good time with family and friends. He knew no stranger and was always willing to lend a helping hand. Zach will always be remembered for his smile, jokes and ability to speak his mind.
Survivors include his parents, Tony Snelling and Deb of Baring Missouri, and Erin Skogsberg and Chris of Labelle Missouri; grandparents, Gary and Carolyn Snelling of Baring, Missouri, Bud and Sharon Donaldson and Stanley Humphrey of Memphis, Missouri and Stan and Sherry Skogsberg of Unionville, Missouri; his siblings are Trevor, Austin and Sadie Snelling of Baring, Missouri, Cody Miller of Memphis, Missouri, Annalise Miller, Emmalyn and Brier Skogsberg of La Belle, Missouri and Shelby Novinger of Columbia, Missouri; along with aunts and uncles, Ryan and Melissa Snelling of Brashear, Missouri, and Bruce and Lacey Humphrey of Memphis, Missouri; and numerous great aunts, uncles, nieces, nephews and a host of friends.
Zach was preceded in death by his paternal and maternal great grandparents.
Funeral Services will be at 11:00 a.m. Thursday, October 11, 2018, at the Doss Funeral Home in Edina, Missouri.
Visitation will be after 2:00 p.m. Wednesday, October 10, 2018, with the family receiving friends from 4:00 to 8:00 p.m. at the funeral home.
Burial will be in the St. Aloysius Cemetery in Baring, Missouri.
An expression of sympathy in memory of Zach Snelling may be left to the family’s wishes. A memorial may be left at or mailed to the Doss Funeral Home 208 N. 4th Street, Edina, Missouri 63537.