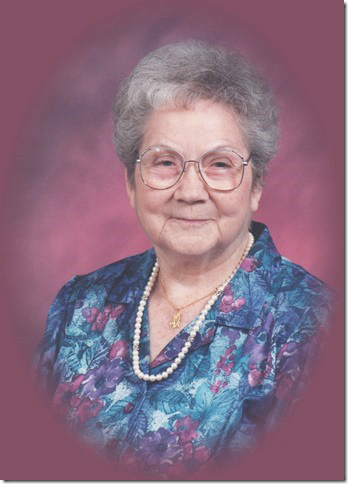 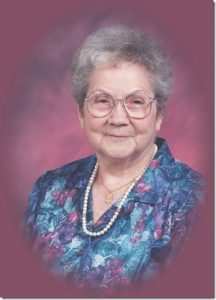 DELLA M. ARNOLD
Della M. Arnold, age 96, of Kahoka MO, passed away peacefully on Sunday, November 25, 2018 at the Clark Co. Nursing Home in Kahoka surrounded by her family.
Della was born July 7, 1922 at Kahoka, a daughter of Andrew Henry and Diamond Theresa Gutting O’Day.
On December 24, 1938, she was united in marriage to Sammy M. Arnold.  It was 16 years later that they were blessed with a daughter, Reva.
Survivors include a brother, Andy O’Day of Wayland; a sister, Mary K. Mertz of Lutz, FL; as well as several nieces and nephews and their families.  She was preceded in death by her parents; her husband, Sammy; her daughter, Reva; and three brothers, Donald, Joseph and Wilbert O’Day.
Della lived in Clark County all of her life except for a brief five years away when she went to Virginia to live and help care for her daughter who was in ill health.  Upon her return, she entered the RCF at the Clark Co. Nursing Home where new friends were quickly made.
Throughout her life she knew well the ethic of hard work as she labored side by side with her husband in the farming operation.  She milked cows and raised chickens, hogs and sheep.  Della was an excellent cook, loved flowers and gardening.  She also loved rides in the countryside and the past few years enjoyed a new hobby of doing puzzles.  But, first and foremost, she loved Jesus and the Word of God, and walked and talked her faith daily.  Della was a member of the Amazing Grace Bible Church where she enjoyed the love and fellowship that was shown by so many.
Funeral services were held Wednesday, November 28, 2018 at 11 a.m. at Wilson Funeral Home in Kahoka with Pastor Dean Tomlinson officiating and Mr. Paul O’Day, eulogist.  Vocalists were Alan and Elizabeth Chatfield with selections “Amazing Grace” and “It is Well”.  Additional music was recordings, “In the Garden” and “How Great Thou Art”.
Honorary pallbearers were Richard McWilliams, Jim Lorigan, Vernon Krebill and Ross O’Day.
Pallbearers were Steve Weaver, John Weaver, Kent Harness, Josh Didier, Paul O’Day and Gene Franklin.
Burial was in the Kahoka Cemetery.
Visitation was held Wednesday at 10 a.m. until services at 11 a.m. at Wilson Funeral Home.
Memorials are suggested to the Amazing Grace Bible Church or the donor’s choice.
Posted in AREA OBITUARIES