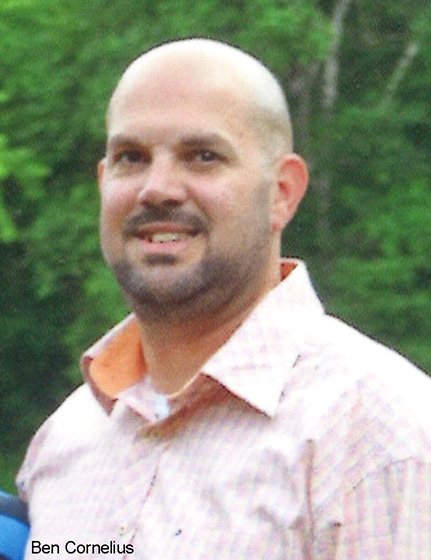 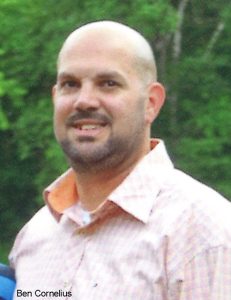 He was born on May 11, 1977 in Hannibal, MO the son of Dave and Kathy Shearman Cornelius.

Ben graduated from Hamilton High School with the Class of 1995 and from Southeastern Community College in Keokuk in 2011.

For most of Ben’s life he was raised by his parents, Dave and Kathy, and sister, Angi in Hamilton, IL.  He knew every inch of that town by spending most days adventuring on his bike.  At a very young age Ben grew a love for any kind of sport.  He knew all of the players and the perfect plays to make; however the Cubs, Bears, Hawkeyes, and Black Hawks was always # 1 in his eyes.  Every August he would get excited to pick out his fantasy football team and hopefully carry on the tradition of taking home the trophy, which he did several times!  He loved sports so much that every summer he played on Chewy’s league in Hamilton with all his buds and he even coached his kids throughout many sport activities throughout the years.  He was also a certified coach for Special Olympics.

He was united in marriage with April on October 17, 2015.  Ben knew from the time he met April that it was fate. He wrote to her “What started as “like” has turned into true love.  I adore you more than the stars above.”  Ben had passion for many things in his life.  His family was always the first. His daughter, Payten, was the twinkle in his eye. Ben’s family was complete with Payten Jean, 14, Payton Charles, 13, and Bryer Nolan, 9.  He was a positive role model for them every day.  As a family they loved going on new adventures to see the world and make new memories. Triva night!  Triva night! Eric and Ryan would call Ben immediately.  Ben was the one everyone needed to have.  His mom and dad taught him well–they knew good music!  No one knew electronics the way he did.  He was always keeping up with the latest technology.  His mother-in-law, Carol, and neighbor, Mary Ann Weirather were two of his favorites that he would go to and set up the latest new thing.  Ben was a man of many talents and was not afraid to try new things like square dancing. No words can even express the kind of person Ben was.  He was a son, father, dedicated husband, sports player, friend, co-worker, and so much more to many people of our community.

Ben was currently employed at Roquette America in Keokuk.

He was a member of First Lutheran Church of Keokuk and also a member of DEC Hands of Donnellson.  Ben was an active member and union steward of the BCTGM Local 48G.

A funeral service will be held at 10 a.m., Saturday at the Vigen Memorial Home in Keokuk, IA with Heather Fuger officiating.  Burial was in the Oakwood Cemetery in Hamilton, IL

Visitation will be on Friday from 6-8 p.m. at Vigen Memorial Home with the family meeting with friends at that time.

In lieu of flowers, memorials may be given for his children’s education.