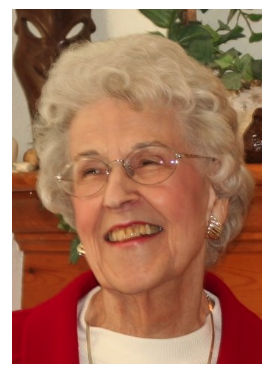 Opal Lincoln Gee passed from this life to her heavenly reward on December 13, 2018. She was born March 8, 1924 in Pickering, MO to the late Orlo and Flossie (Neal) Lincoln.

She married Donald Fosdick Gee on November 4, 1945 and they enjoyed their lives together for almost 59 years until his death September 20, 2004. Opal and Don were partners in local church ministry as they served churches in Iowa, Illinois, Missouri, Indiana, Oklahoma, and Colorado for nearly 50 years. Opal served primarily as song leader, soloist, and choir director in their churches.

Beginning with her first poem “Life Begins At 40,” Opal became a published writer in national Christian magazines and accomplished speaker at banquets, conventions, and retreats across the U.S.

In her years as a widow, Opal continued her ministry of serving through music, leading of Bible studies, writing and speaking with an emphasis on her memories of World War II. In June, 2018 she was profiled by the Longmont Times-Call in a special publication recognizing “100 Get to know your neighbors.” On September 26, 2018 Opal was honored at the Crowne Plaza Hotel in Denver as one of four finalists from across the state at the 2nd Annual Ms. Colorado Health Care Association Pageant with the theme “Beauty Knows No Age.”

In addition to her public accomplishments, at the core of everything that Opal did, family was a major driving force of her life. It was immediately evident in conversations and in the photos and albums always near her. She will long be remembered for her warmth, infectious wit, and wisdom that she shared with all she encountered.

Opal was preceded in death by her parents, husband Don, sisters Florence, Lois, Ruth, and Doris and brothers Roy and Jim.

Visitation will be from 5-7 p.m Wednesday at Howe Mortuary 439 Coffman St. Longmont, CO 80501 with the funeral at 10 a.m. Thursday at Life Bridge Christian Church 10345 Ute Highway, Longmont, CO 80504. Burial will be after a private service at the Veterans Cemetery in Springfield, Missouri.