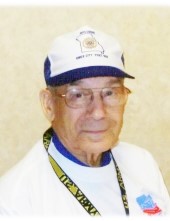 Allen was born on July 5, 1926, in St. Charles, Iowa, the son of Lester Marion and Florence Louisa Daub Davidson.

After settling in Knox County, Missouri, Allen graduated from the Edina High School in the Class of 1943. After graduation served his country in the United States Army and World War II ended just before he was deployed. He also served during the Korean Conflict from 1950 to 1952, as a radio operator.

Allen returned to farm with his father on the family farm northwest of Edina and also worked as a butcher for the Barnes Locker in Edina.

On April 12, 1959, in Edina, Missouri, Allen married Geraldine Matilda Woodard and to this union three children were born.
They made their home on the family farm near Edina, and they raised their family. After many years of raising a crop, tending cattle, and selling eggs, they sold the farm and moved to Edina in 1997.

Allen was a member of the First Baptist Church of Edina, Mt. Salem Baptist Church near Newark and the Hurdland Baptist Church in Hurdland, Missouri at present. He served as a lay minister throughout the area in relief of many ministers, had served as the Pastor of the Mt. Salem Church, and as Chaplain of the LaBelle Manor.

Allen was a member of the Knox City American Legion Post #368 and served as their Chaplain. He was always honored to serve on their Honors Detail for fallen comrades.

He was preceded in death by his daughter, Margaret Ann Davidson in infancy; parents, Lester and Florence Davidson, and two sisters, Marie and Leonard Lindgren and Golda and Ralph Wheaton.

Military Honors were presented in the Linville Cemetery in Edina, Missouri, by the Knox City American Legion Post.

An expression of sympathy in memory of Allen Davidson may be left to the Knox City American Legion Post or the Hurdland Baptist Church. A memorial may be left at or mailed to the Doss Funeral Home 208 N. 4th Street, Edina, Missouri 63537.