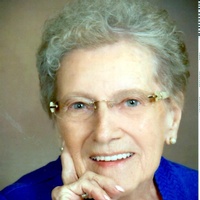 She was born in Knox County, MO July 29, 1932, the second child of Paul and Ethel (Walter) Pinson.  June attended rural schools and graduated from Edina High School in 1950.  After graduation she worked at Bell Telephone in Quincy, IL and later in the Edina telephone office.  In 1951 she was united in marriage to Ralph S. Miller.  After a few years they moved to a farm south of Edina.  They were the parents of three children, Ralph Stephan Miller (Pat), Rita Helen Miller Worthington and Tracy Annette Miller Mallett (Billy).

June was active in the Harmony Extension Club, the Novelty PTA and the Novelty 4-H club.  In 1976 she moved to the Bon Air Motel in Edina where she was manager/owner until her retirement in 2001.  During these years she taught cake decorating to adults and 4-H kids; around 80 people total.  She used to laugh and say she was a recycled 4-H leader.  Many of you will remember her as part of your happy occasions with her decorated cakes.

In 1986 she was united in marriage to Sylvester “Bud” Smith.  They enjoyed travelling until his death in 1992.

June was a member of the Edina Christian Church, President of the MO State Motel Association and a 34-year member of Matilda Chapter #411 Order of the Eastern Star.  June served as Worthy Matron several years, District Deputy Grand Matron and Grand Representative to New Brunswick, Canada in 1991 and 1992.  In 1996 she was Grand Warder.

Preceding her in death were her husband in 1992, her parents, brother, Jesse Pinson, brother-in-law, Mike Lee and son-in-law, Richard Worthington.

Funeral services will be held 2 p.m. Sunday, January 6, 2019, in the Hudson-Rimer Funeral Home in Edina, MO.  Pastor Paul Harvey will officiate the services.  Burial will be in the Linville Cemetery.  Music will be provided by Wynona Banks, soloist and Carol Hayes, organist.

Easter Star services will be held Saturday at 5:30 p.m. conducted by Matilda Chapter # 411 O.E.S. and the family will receive friends from 6 p.m. to 8 p.m. in the Hudson-Rimer Funeral Home.