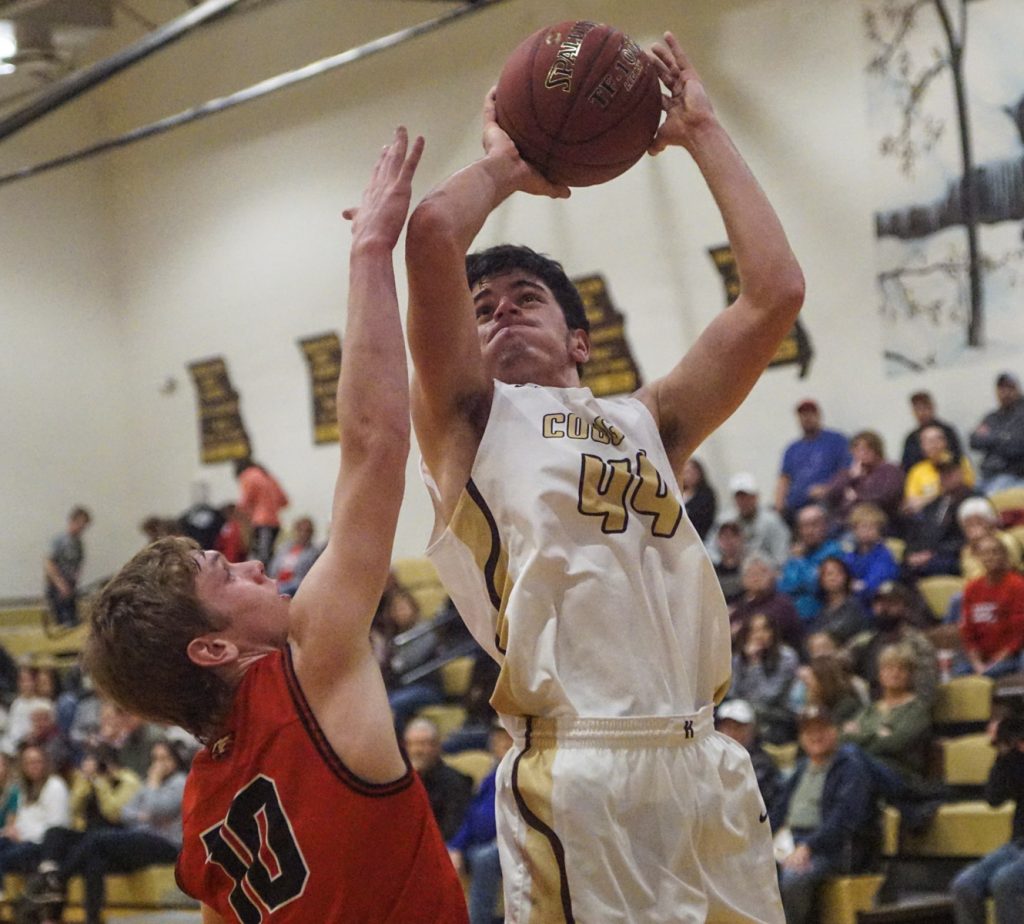 Knox County (4-9) jumped out to a 10-5 lead in the first quarter of the 47th Annual Highland Tournament boys’ consolation championship game. Highland (4-6) answered with a 12-3 second quarter run.

The Cougars moved the ball well and took advantage of Knox County turnovers for a 54-44 win. Highland appeared to out rebound Knox County most of the night. The Cougars were able to defend without putting the Eagles on the free throw line.

Highland was 14-18 from the free throw line compared to 2-7 for Knox County. The host Cougars held an 11-9 advantage in made field goals. Knox County hit eight three pointers to six for Highland.

“We had a really emotional win last night,” Highland coach Jack Schrader said in response to a question on the Cougars’ second quarter turnaround. “Human nature, we were a little bit flat.”

“It was an exciting game. We carried that over and tried to make too many hero plays,” Coach Schrader said. “Once we settled down, played our game then things fell into place.”

The Cougars led 24-23 at the half. Coltin Morrow sank a Knox County free throw with 41 seconds to play in the first half. The teams played a competitive third quarter. Highland scored several second chance points and drew fouls on the glass. Highland ball movement was one of the determining factors in the second half.

“This was probably the best we have rebounded all year,” Coach Schrader said. “That comes with our movement on offense. We get them out of position and us in position to get the rebounds and loose balls.”

“One thing leads to another. Its’ great for them. Last night was a great win over a tough Scotland team,” Jack Schrader said. “Today we played good. Solid enough to get two in a row. It’s been awhile for them.”

Highland led 38-31 after three quarters. Jacob Becher stepped out and hit a Knox County three pointer with 5:51 to play in the game, trimming the Cougar lead to 40-36. Colton Bliven answered in kind for a ten point lead at the four minute mark.

Highland free throws put the Cougars up 52-41 with 38 seconds to play. Dillon Strong closed the book with a KCHS three in the closing seconds. Highland took much needed momentum into a cross county rivalry game with Canton on January 8 with a 54-44 win.

“They hit the boards,” Knox County coach Zach Short said of Highland. “We aren’t blocking out. We teach to hit and fetch. We refused to do that. Rebounding is pretty simple.”

“It’s effort. It’s not that our kids aren’t working hard. They are working extremely hard. They are just doing it foolishly. When you are 5’8”, it’s tough to go in and jump up when you have 6’2” behind you.”

“It was over and over again,” Coach Short said of the lack of rebounds. At some point, they need to understand that it just doesn’t work. It’s not just tonight, It’s been going on all year.”

“I’m hesitant to do some rebounding drills that I have because we are thin. We can’t afford an injury,” said Coach Short. Two of Knox County’s better interior players have missed considerable time with injuries. Robert Mauck and Logan Miller are currently unavailable due to injury.

“Our first possession defense was very good. When we needed (to get a rebound) we just don’t do it,” Zach Short said. “We will fix it. I’m proud of the effort. I thought we executed some things really well.”

“Things are really going to pick up for us on the schedule,” Coach Short said. “We need to stay together and keep working because it can go the other way really quick. I am going to keep pushing them and helping them the best way I can.”

“We need to get better. I know that. The process will get better,” Zach Short said. “We will rebound better. I don’t know if we will get the rebounds, but we will block out better. We will do what we can.” 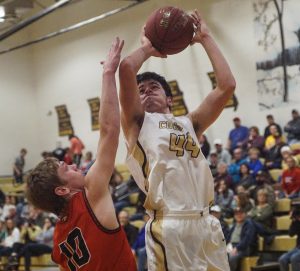 COUGARS WIN TWO STRAIGHT-Kaden Koch (shown on the right) soars for a scoring try during Highland’s 54-44 win over Knox County in the boys’ consolation championship game of the 47th Annual Highland Tournament. Koch led Highland with 14 points. Trent Klocke defends on the play for Knox County. Klocke finished with 12 points.
Kaden Koch and Trent Klocke were selected to the 2019 Highland Boys’ All Tournament Team. Photo by David Sharp