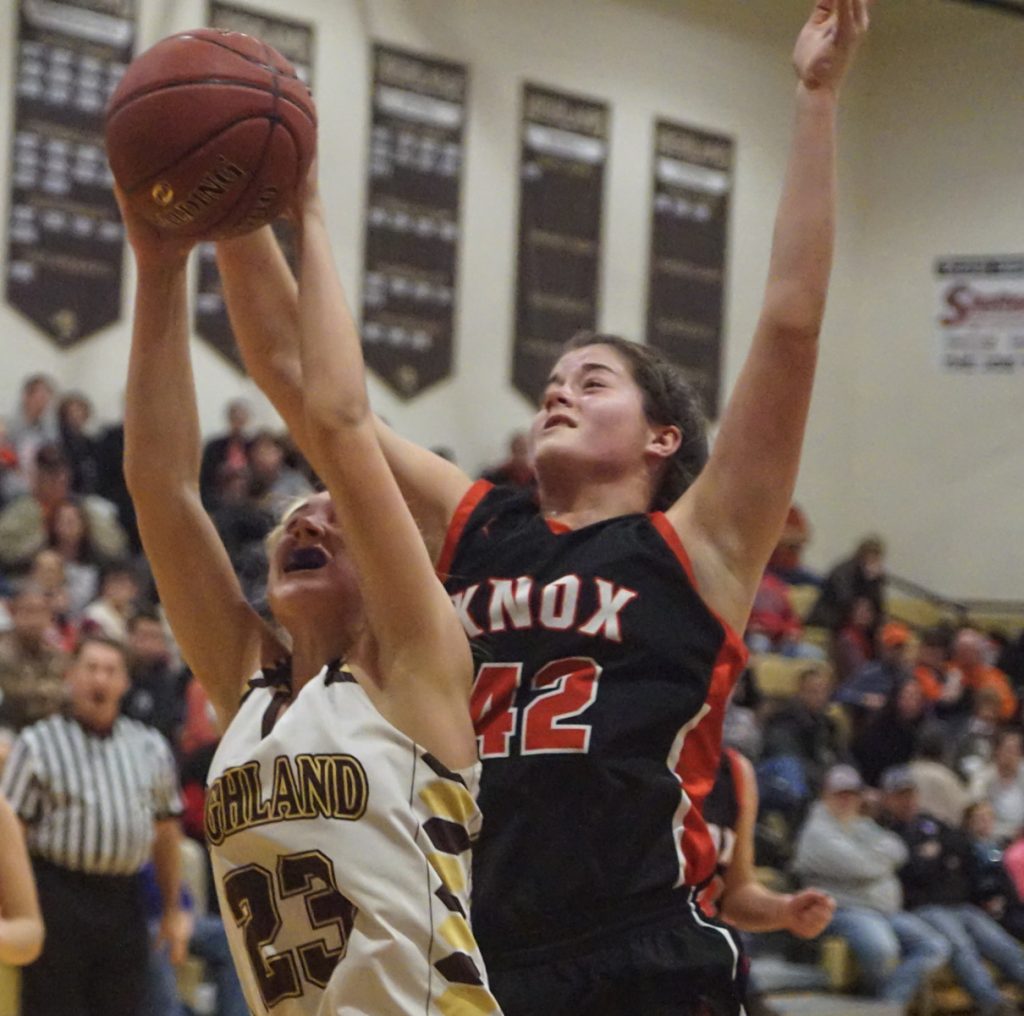 Addy Johnson put in 21 Highland points, leading the Lady Cougars (10-0) to a 65-51 win over Knox County (9-4) in the girls’ championship semifinal round of the 47th Annual Highland Tournament.

The game was crisply, and well played by both teams. The first half was probably the best basketball this reporter has witnessed this season to date. Highland executed in the opening minutes, seizing a 13-8 lead on a Kennedy Flanagan bucket with 4:27 to play in the first quarter.

Knox County took the ball inside during a 10-5 rally. Sidney Miller cashed in a three shot opportunity for an 18 all tie with 1:25 remaining in the opening period. Addy Johnson put Highland back on top with a three ball at the 55 second mark.

Highland closed the first quarter on a five nil run for a 23-18 lead. Knox County continued to challenge the formidable Lady Cougar front line in the second quarter. Gabby Brown sank a Cougar three. Addy Johnson finished a Kaitlin Benson feed for a 28-20 Highland lead with 6:31 to play in the first half.

Knox County came back with a 6-0 run. Riley Strange pounded the glass for two field goals and two free throws. Tadym Mason buried a three ball for a 30-29 Highland edge with 42 ticks on the clock.

The teams traded turnovers in the final 30 seconds. Knox County missed two free throws with three seconds to play in the half. The teams went to the dressing room with Highland holding a slim 30-29 lead.

“It was a game of runs,” Highland coach Meleia Niemann said. “We would jump out to an eight or 12 point lead and the next thing we know it would only be a four point lead. It was a back and forth game.”

“We had different defensive assignments. We were definitely better with certain people on certain people,” Coach Niemann said. “There were times I didn’t have the right person guarding (Sidney) Miller, (Riley) Strange or (Savannah) Mauck. We made those adjustments and it made a big difference.”

The Lady Cougars took the ball to the rim early in the third quarter. Kaitlin Benson and Kennedy Flanagan put Highland up by ten points early in the period. Knox County roared back with a 9-0 run.

Riley Strange put the ball back for a 41-40 Cougar lead with 3:30 showing on the third quarter clock.

Knox County point guard Alyssa Peavler ignited the rally with a pair of free throws and a bucket. Highland turned the ball over at the 4:16 mark of the third quarter. Becca Scott was assessed a technical foul, resulting in two Sidney Miller free throws.

The Lady Eagles lost Alyssa Peavler to a wrist injury. During the second half of this game. Peavler told this reporter that she would likely have a cast placed on the joint this week. The amount of time the two year starter will miss is slated to be estimated at a Doctor visit later this week.

Highland battled back late in the third quarter for a 53-46 lead entering the final eight minutes. Gabby Brown helped fuel a streak of nine unanswered points for a 50-40 edge with 2:05 to play in the period.

Knox County cracked off a 6-0 run late in the third quarter. Addy Johnson stole the ball and completed a three point play with 14 seconds remaining in the quarter.

Highland made plays in the final five minutes to come out on top. Kennedy Flanagan drew two charging fouls. Kaitlin Benson buried a home run ball for a 58-46 lead at the five minute mark.

“Addy Johnson had a great game,” Meleia Niemann said. “Offensively, defensively. She made big plays. She had a great steal right under the basket and put it back in. Gabby Brown came in and played some important minutes for us.”

“The second half I thought Kennedy Flanagan dominated inside,” Coach Niemann said. “We only drew two contact fouls inside in the first half. She got two offensive charges against them.”

“We are still learning. I just love our effort,” Meleia Niemann said. “We have been able to wear some teams down. I thought we did that tonight. It was a fast paced game. We have to play hard to keep winning.”

“I saw what I wanted out of my girls,” Knox County coach Kelsea Dorsey. “They just give me 32 minutes all the time. We never gave up. Even when we got down ten plus, we were still fighting for it.”

“I think the difference in them winning that game was them coming out of the half at the start of the third quarter,” Coach Dorsey said. “They got a nine point swing on us right off the bat.”

“It’s tough to come back against a team like that in the second half when that happens,” Kelsea Dorsey said. “Giving them that quick start to the quarter just was the difference I think.”

“It was just a game of runs. When they got up ten points, they got a technical foul and we got it back within one. We just needed to build more on the momentum that we had,” Dorsey said.

“I am super proud of the way we played. I really want to match up with them again,” Kelsea Dorsey said. “Maybe we will see them in the Palmyra Tournament. They are good competition for us.” 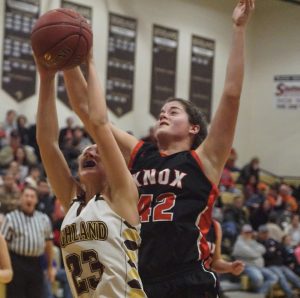