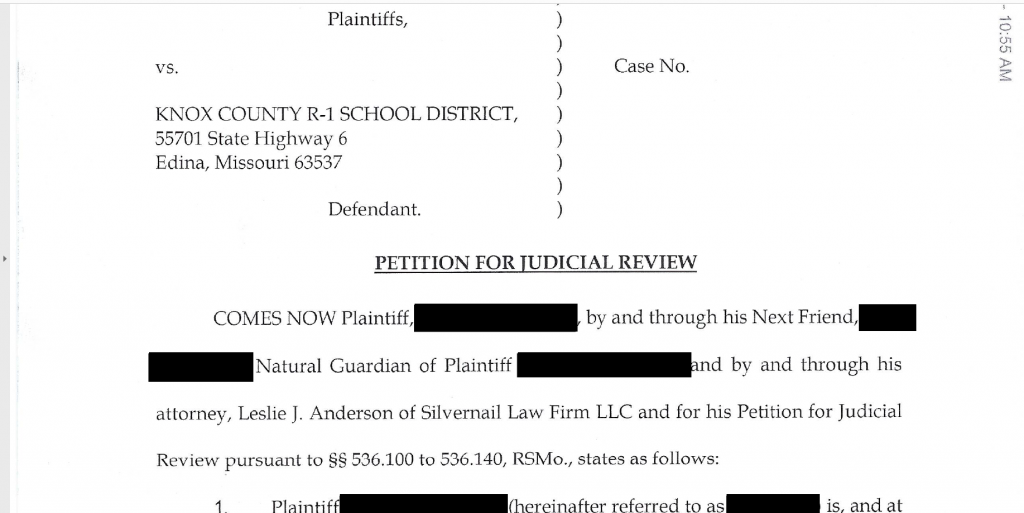 (Note: This story contains graphic descriptions, which some readers may find disturbing.)

Edina, MO – Wednesday, January 23, 2019 – Late last week, two more petitions for a judicial review were filed by the families of middle school students suspended from the Knox County R-1 School District. The students pleaded guilty to misdemeanor harassment charges last month, which stemmed from previously reported incidents in the football field locker room at the beginning of the 2018-19 school year.

The petitions and the exhibits filed by the petitioners are open to the public and give an up-close look into the procedures of the school district through their communications to the parents of all three of the suspended students.

Another newly released document, Exhibit 6 in Case No. 19KN-CC00003, titled “Board of Education’s Findings of Fact, Conclusion of Law and Decision” details the proceedings of one of the three appeals hearings heard by the KCR-1 School Board on December 17, 2018.

The 13-page document outlines the process of the appeal hearing, which included witness testimony, questioning by legal counsel and submissions of evidence.

Exhibit 6 explains exactly what the School Board was exposed to including a detailed and graphic explanation of the incidents that took place in the football field locker room, that multiple sixth grade students were held down or up in the air by two eighth grade students while a third eighth grade student poked a metal object “in their rectum, over their clothing”, which happened on multiple occasions between August 22 and September 6, 2018.

It is also states in Exhibit 6, the School Board looked at photos of the items used in the assaults to include a “large metal bolt” and “water heater overflow valve.”

The newly filed court documents give a more complete picture of the roles the students played in the locker room assaults.

The communications between the Middle School Principal, District Superintendent and School Board President show the district acted quickly and concisely by communicating with all three families immediately explaining the polices in place and the process of appealing the decisions to suspend the students.

Exhibit 6 takes it a step further by giving an exact timeline into all of the procedures taken by the Middle School Principal from the time she was notified about the locker room incidents on Sunday, September 9, 2018. The first school day after being notified, Principal Nancy Goodwin took reports and notified the Children’s Division and local law enforcement.

The petitions for judicial review filed in Case No.’s 19KN-CC00002, 19KN-CC00003, 19KN-CC00004 are nearly identical in the way they are worded, though two separate law firms are representing the three parties.

According to Missouri Revised Statute 536.140 section 5, the court will render a decision affirming, reversing or modifying the School Board’s decision.

At the time of publishing this article, a court hearing date had not been set for any of the three cases in Knox County Court.

A request for comment was not immediately responded to by the legal council representing the students involved in the most recently filed cases.

(Note: The Edina Sentinel has redacted the names of the students and their parents involved in the case.)