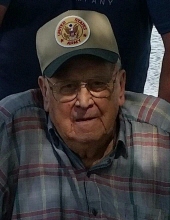 Louis Richard Poston, age 93, of Baring, Missouri, passed away, February 1, 2019, at his home surrounded by his children, grandson, great grandson and his faithful dog Jersey.
Richard was born July 5, 1925 in Adair, Missouri the son of Louis Joseph Poston and Margaret Catherine (Johnston) Poston.
Richard received his education at Oak Grove Rural School in Adair, Missouri and graduated in the Class of 1943 at Baring High School in Baring, Missouri.
He was a member of the Knights of Columbus, the American Legion and St. Aloysius Catholic Church in Baring, Missouri.
As a young man Richard enjoyed playing for the Adair baseball team, which his brother and he started. He became a well- known pitcher in the area. He received an invitation to try out for the St. Louis baseball team. He never made it to that try out because Uncle Sam sent him a letter explaining that he had been drafted. He served from 1952-1954 in the Army stationed at Fort Leonard Wood, Missouri during the Korean War. He loved good old classic country music—“not that nonsense you hear today” he would say. Back in the day, he and his brother, John Robert, drove many a mile hitting all the dance halls in the area.
He and his wife lived in Quincy, Illinois for a short period before coming back to the Adair, Missouri area to operate the family country store. After the business closed, he worked for Arnold Lumber Company in Kirksville, Missouri for several years. He then moved his family to Baring, Missouri so his children could attend school there. To be closer to home, he became employed for the Knox County School District until he retired in 1992.
After he retired, Richard enjoyed keeping his yard pristine, building things, attending grandchildren’s sporting events, listening to St. Louis Cardinal ball games and his favorite country music. His favorite thing to do was spending time with his family and reminiscing with friends young or old about the good old days.
In his life, Richard played a variety of roles. He was a son, a brother, a classmate, a baseball pitcher, a soldier, a neighbor, a friend, a farmer, a merchant, a truck driver, a laborer, a mister fix-it, a devout Christian, a proud patriot, a huge St, Louis Cardinal fan, a husband, an uncle, a grandfather, an animal lover and just an all- around good guy, but his best role, the one he did with absolute perfection was being DAD. He will be sadly and deeply missed by his family.
Surviving are his 4 children Loretta Poston of Kirksville, Missouri, Rose Marie Saddler and her husband Les of Kansas City, Missouri, Carol Parrish of Baring, Missouri and David Poston and fiancé Stephenie Conn of Baring, Missouri. Grandchildren include Shane Poston of Baring, Missouri, Kristie Saddler of Independence, Missouri and Cole Conn of Baring, Missouri. Great grandchild, Caden Poston of Baring, Missouri and one nephew Bobby Poston of Kirksville, Missouri.
Richard was proceeded in death by his wife Shirley, his brother John Robert Poston, sister in law Margie Poston, his parents Louis and Margaret Poston and his four legged fur baby Peaches.
Visitation will be Thursday, February 7, 2019 after 2pm with the family receiving friends from 5-8pm with a prayer service at 7:30pm at the Doss Funeral Home in Edina, Missouri.
Mass of Christian burial will be held at 10 am Friday, February 8, 2019 at St, Aloysius Catholic Church in Baring, Missouri.
Father Colin Franklin and Deacon Dave Ream will officiate and music will be provided by Brent Karhoff, soloist and Nancy Reardon, organist.
Pallbearers will be Larry Sykes, Tony Snelling, Frankie Williams, Don Patterson, Bob Kincaid and Richard Clark. Honorary Bearers will be Marty Davidson. Bob Dobbs, Georgie Higgins, Bob Hunolt, Mike Allen, David Higgins, Gary Snelling and Terry Fast.
Interment with Full Military Honors will be in the St. Mary’s Cemetery in Adair, Missouri. Honors by the Knox County American Legion and the VFW.
An expression of sympathy in memory of Richard Poston may be left to a reputable Disabled Veterans organization or St. Mary’s Cemetery Association. A memorial may be left at or mailed to the Doss Funeral Home 208 N. 4th Street, Edina, Missouri 63537