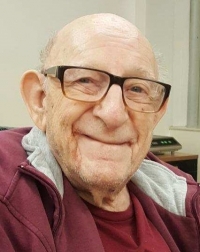 Fred was a member of the Church of St. Peter.

Funeral services will be held on Saturday, February 16, 2019 at 10:00 AM in St. Peter Catholic Church. Interment at Quincy Memorial Park with military rites conducted at the cemetery. There is no visitation, but friends are invited to the memorial mass. Memorials may be made to Sunset Home or to Blessing Foundation for Hospice. The Duker & Haugh Funeral Home is in charge of the arrangements.