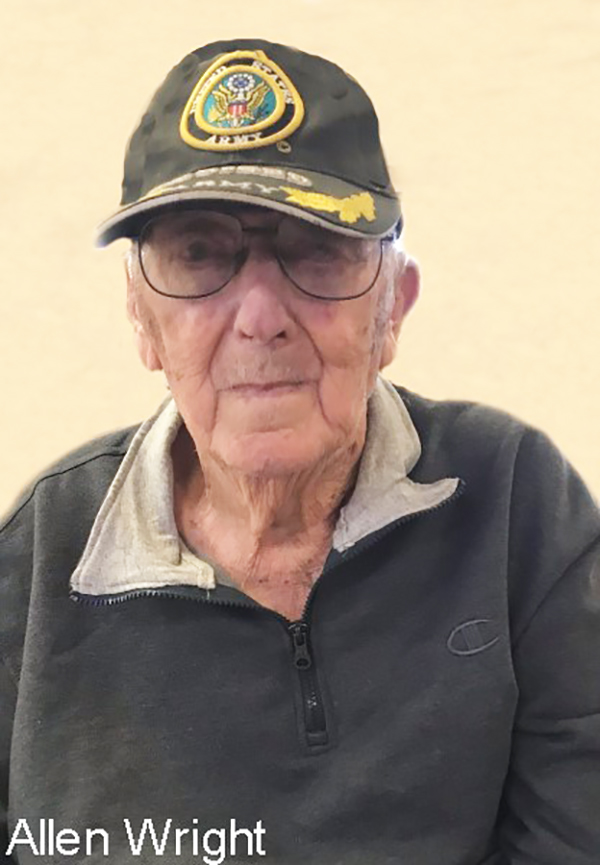 He was born September 7, 1927 in Ft. Madison, IA the son of Franklin and Gertrude Dahn Wright.  On January 8, 1954 he was united in marriage to Anna M. Kaneer in Quincy, IL. She survives.

He was preceded in death by a daughter, Diana Lynn, a son, Allen Wayne, two grandsons, James and Franklin Wright, his parents and three sisters, Dorothy Cloud, Patricia Urban and Gladys Brouillette and one brother, Edward Wright.

Allen enlisted in the United States Army on February 26, 1946 and proudly served his country until his retirement on January 31, 1968, retiring with the rank of First Sargent.  He served two terms in Korea, and also served in France, Germany and several posts in the United States.

Allen later had been employed by Krebill’s Engineering for a short time before going to work for the Iowa State Penitentiary in Ft. Madison, IA where he worked from 1968 until his retirement in 1990.

He loved working on cars, listening to Jimmy Davis and Patsy Cline music, and watching old westerns on television.  Allen enjoyed spending time outdoors mowing the grass, taking walks and going for car rides.  Most of all, he loved his grandchildren and family and received great joy from spending time with them.

Visitation for family and friends will be held from 6-8 p.m., Friday at the Vigen Memorial Home in Keokuk, IA.  A private service and burial will be held at a later date.

Memorials may be made to the Alzheimer’s Association or to the donor’s choice.