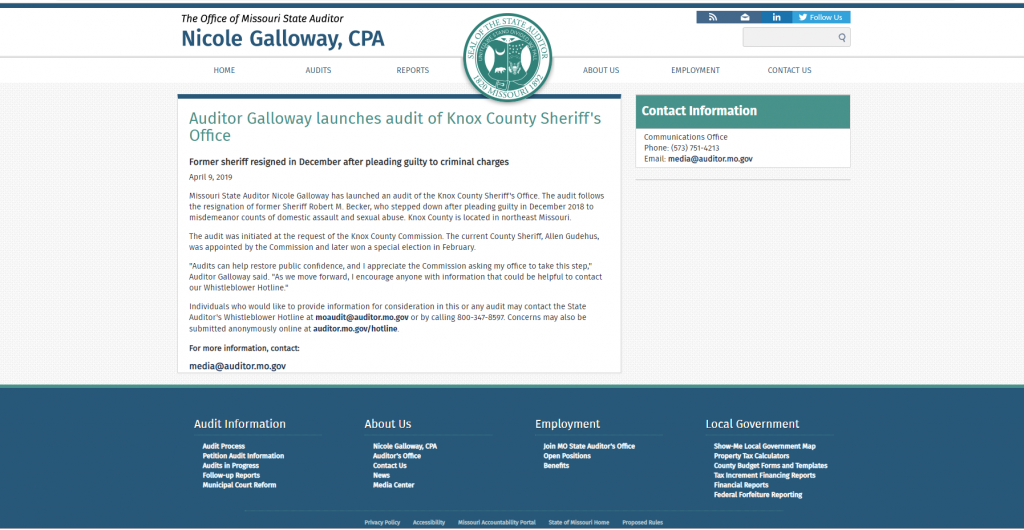 (This story was published in the April 10, 2019 edition of The Edina Sentinel.)

A representative of the Auditor’s office began the audit on Monday, April 1, 2019.

Near the end of 2018, just days after former Knox County Sheriff Robert Becker pleaded guilty to misdemeanor criminal charges, the Knox County Commission reached out to the Missouri State

Auditor Nicole Galloway to request an audit of the Sheriff’s Office.

The request for the audit, dated December 21, 2018, is included below:

Ms. Nicole Galloway: We the Knox County Commissioners are requesting an audit to be conducted on the Knox County Sheriff’s Office. Regarding the guilty plea charges that Sheriff Becker pled guilty to during court on December 19, 2018 of sexual abuse and domestic assault, we feel it is in the county’s best interest to have an audit completed on the Sheriff’s office as soon as possible. We look forward to hearing from you. Thank you.

On February 20, the Commission received notice from the State Auditor’s Office notifying them the Auditor has agreed to audit the KCSO.

In a letter response dated February 20, 2019, to the Commission from the Assistant Director of Local Government Audits Kelly Davis, the Auditor’s office replied, “We have carefully reviewed the request, subsequent allegations that have come forward about the Sheriff’s Office, and the results of our last audit conducted of the Sheriff’s Office. The State Auditor has agreed to perform an audit of the Sheriff’s Office under the authority granted in Section 29.230, (of the Missouri Revised Statutes).”

The letter reply also states, “As in any audit performed by the State Auditor’s Office, concerns expressed to us will be considered; however, the scope of the audit will be determined by us.”

“Essentially, we decided it was in our best interest and the county’s best interest to request an audit of the Sheriff’s Office given the circumstances of the removal of the former Sheriff Robert Becker,” Knox County Presiding Commissioner Evan Glasgow told The Edina Sentinel.

“They accepted our request, but they will decide which way the audit is going to go. They have control of the audit,” said Eastern District Commissioner Ronnie Leckbee.
“That’s kind of the point, to have a third party come in and take a look at it with a fresh set of eyes,” said Glasgow.

“I’ve been through several audits. I think I’ve had one when I was Sheriff before. Every auditor is a little bit different when it comes to what they’re looking for, but the general procedure, for the most part, is the same,” said Knox County Sheriff Allen Gudehus. “The main part of the audit is covering the previous two years. They’re also checking our procedures for how we do things now. I can’t speak for the past two years. I can only speak for the past two months.”

“They interviewed us about our procedures, how we do things,” said Sheriff Gudehus.

According to correspondence between the Commission and the Auditor’s Office, the audit could include, but is not limited to, reviewing minutes, written policies and procedures, financial records, interviewing personnel and certain external parties and testing selected transactions.

Once completed, the audit report will include the objective, scope and methodology of the audit, the audit results, findings, conclusions, recommendations, a compliance statement about the

Government Auditing Standards, a summary of the views of the responsible officials and, if applicable, the nature of any confidential or sensitive information omitted.

According to the Commission and Sheriff, the Auditor’s Office is expected to be in Knox County collecting information until the end of April.

It is unknown when the audit will be released to the public. 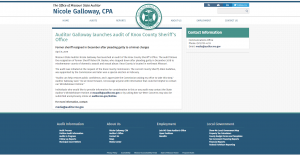