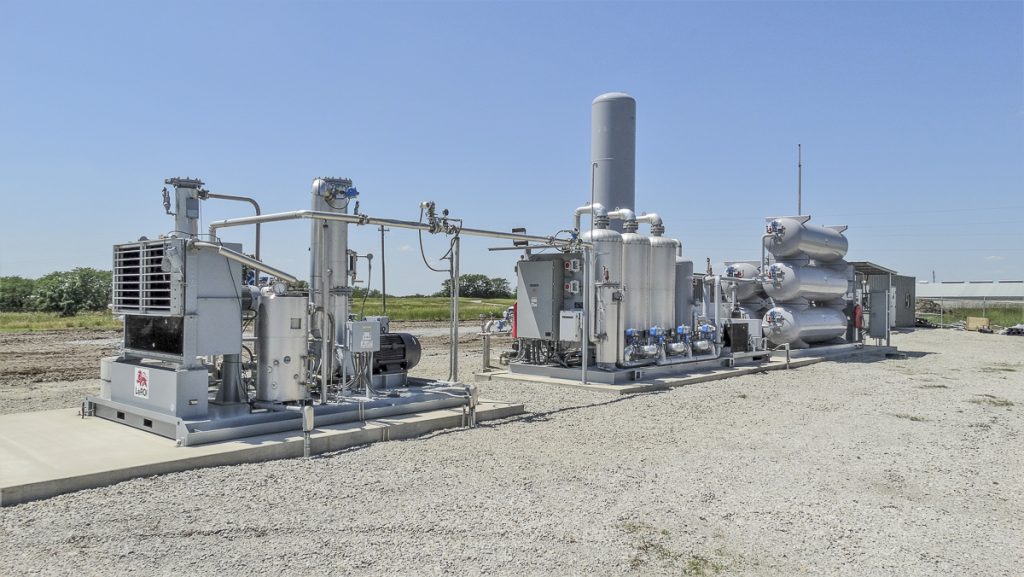 RAE has engineered a way to capture and profit on the biogas produced by hog manure, which happens to be the main contributor of greenhouse gasses on planet Earth, and Smithfield has already converted a handful of it’s CAFOs right here in our own backyard – the northern tier of Missouri – to capture, purify and sell methane gas as renewable energy at a premium rate.

“The first step was really to take a problem and make it into a solution that was going to provide some monetary returns and convince Smithfield that it wasn’t going to cost them money but, in fact, save them operational money, put them into a whole nether industry, which is energy, and provide some real solutions to society about what we’re going to do with all this manure,” said Rudi Roeslein, driving force behind the initiative, during a 2015 STL Me TV online interview with Michelle Anselmo.

The media tour party met at the Farm Bureau office in Milan on Monday, June 10, to caravan through the rolling hills north to a Smithfield CAFO and take a tightly controlled peak at a life sized model of the business of harvesting methane as a renewable resource at the Smithfield Locust Ridge Farm.

Among the journalists along for the ride were reporters from ESPN, Outdoor Guide, The Columbia Daily Tribune, a locally and nationally syndicated Sirius XM outdoor show, the NEMOnews Media Group representing The Milan Standard, The Edina Sentinel, The Clark County Media, the Shelby County Herald, The Palmyra Spectator, and others.

The point of the tour: Smithfield and Roeslein have teamed up and figured out a way to harness methane gas and sell it for profit while negating the release of harmful greenhouse gasses, methane and carbon, into the atmosphere. The two companies sparked the imagination showing off what is possible where methane gas and concentrated animal feeding operations are concerned.

“This is what is called a concentrated animal feeding operation, also known as a CAFO,” said RAE Communications Director Brandon Butler at the beginning of the tour at the Smithfield Locust Ridge Farm, which is located in the northern section of Sullivan County. “Here in Missouri, there was a lot of controversies this year in the legislature about these kinds of operations and local versus state control. I think there are a lot of misconceptions about how these farms actually operate. You’re going to see here just how clean this operation is and, now, all these environmental and ecological advantages that this partnership between Roeslein and Smithfield are bringing to not only this operation but operations like it across North Missouri. It’s really a revolutionary process and we’re pretty proud of it. So, we’re excited to show you around. Smithfield Foods is the largest hog producer in the world. What we’re doing at Roeslein Energy is we’re producing renewable natural gas from animal waste. Being in partnership with Smithfield, we have an enormous supply of manure that we can then turn into this renewable natural gas. We have a true joint venture called Monarch BioEnergy and we’re profiting together through that. Smithfield is bringing the hogs and the hog manure. We’re bringing the technology and how to turn that into a renewable natural gas.” 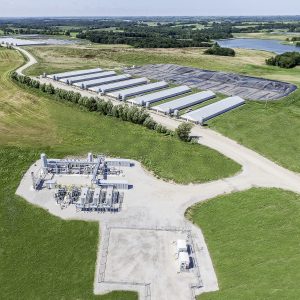 This aerial photo showing a concentrated animal feeding operation, covered lagoon and methane gas purification facility, which resembles the process being used at the Smithfield Locust Ridge Farm in Sullivan County, Missouri, was provided by Roeslein Alternative Energy during the media tour on Monday, June 10, 2019.

“You’re looking at an impermeable cover. This is a lagoon. On most farms, there is no cover on these lagoons. The waste goes out and is under this cover being digested. There is bacteria that is creating this gas eating away at that waste. What you’re seeing is an inflated balloon that is all soon-to-be renewable natural gas.” said Butler.

“Just as a background, each one of these barns has about a thousand head of finishing animals,” said Senior Director of Smithfield Renewables and Hog Production Division Environmental Affairs Smithfield Foods International Group Kraig Westerbeek while pointing to a set of eight long metal buildings. “They will be stocked about two to two-and-a-half times a year. They (the hogs) come in at about 50-pounds. They leave at around 270-pounds. At this particular complex, we have about eight sets of (eight) buildings. Each (set) would have a lagoon. Prior to the cover, it was an open lagoon. The covers were added and that captures the emissions and gas from the anaerobic treatment.”

“There are about two-million hogs per year through these farms in North Missouri,” said Westerbeek.

“The animals are on a slotted floor, so the manure falls through immediately after they defecate and it goes into a subfloor. There are a lot of styles of buildings in the United States. These used to be flush buildings where water was used to flush them out. Now, they’ve been retrofitted for scrapers. There is a scraper mechanism that goes through there four to six times a day. It scrapes that manure to the end of the barn to a collection pipe and into the lagoon,” said Westerbeek.

“Where it basically starts is getting the manure fresh from the barn and putting it into the digester (covered lagoon),” said Westerbeek.

“You don’t have to add anything. That’s the beauty of the process. Anaerobic digestion has been around as long as man. It’s the breakdown of organic solids by anaerobic bacteria, and the result of that, as those solids break down is converted into CH4 (methane) and CO2 (carbon). That carbon is converted into a gas,” said Westerbeek. 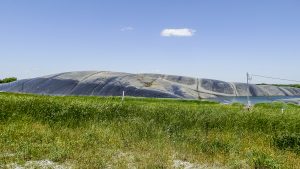 This impermeable cover keeps biogasses from being released into the atmosphere and collects them before they are piped to a methane gas purification facility at the Smithfield Locust Ridge Farm in Sullivan County, Missouri. Photo by Echo Menges

“It’s exactly how methane is formed underground. Organic matter slips and is pushed underground and over eons, it forms methane,” said RAE frontman Rudi Roeslein. “One of the benefits I think we were able to show Smithfield is that before the water that comes out of these, obviously sooner or later these lagoons would fill up with manure and urine and they do have some water that comes into these systems. So, that would have to be land applied. Before it’s land applied, it has to actually meet some nitrogen reduction. So, each of these farms have somewhere between 350 to 500 horsepower that uses advanced denitrification process, which actually aerates it and puts the nitrogen back into the atmosphere. When you think about a lagoon there is actually about 350,000 gallons per foot per acre. These lagoons are about three to four acres. There are almost a million gallons per foot, per lagoon that now does not have to go through their denitrification facility and that water is pure water. It can go right back out into a landscape without having to go through this process. That was obviously a benefit. The other benefit is that instead of having this exposed to the atmosphere, as Kraig mentioned earlier, methane is 25 to 30 times more destructive than CO2 (carbon). So, therein lies the carbon credit California politicians and citizens decided that they didn’t want that methane going into our atmosphere. We’re at the highest parts per million of CO2 this Earth has seen since prehistoric times. Anything we can do to reduce that, whether it’s emissions from industry or emissions from agriculture, is what we’re trying to accomplish here. So this has become a very collaborative effort between our two companies. We (RAE) provide the technology that actually purifies the gas. They (Smithfield) help us with the technology and understanding manure and hog production.”

After looking at the giant cover that covers the lagoon, which the tour guides called an “impermeable cover”, the media tour was taken on to the gas purification and processing facility, a giant onsite contraption used to remove H2O (water), sulfates and carbon from the methane. The carbon is burned off using a flare and the methane gas went on to a filling station where it goes through one more round of filtration to remove more water before it was concentrated and stored in large cylinders aboard a trailer. 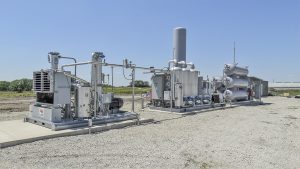 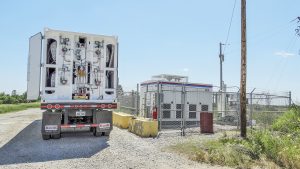 This trailer is being filled with renewable natural gas harvested from concentrated animal feeding operation lagoons at the Smithfield Locust Ridge Farm in Sullivan County, Missouri. According to a representative of Roeslein Alternative Energy, it take approximately 16-hours to fill this trailer with methane gas before it is transported to and inserted into a natural gas pipeline. A pipeline access point is expected to be operational in Milan, Missouri within the next month. Photo by Echo Menges

Within about a month, Milan, will have a new pipeline access point, which is big news for the rural community.

Smithfield Foods’ hog barns only, which are listed under Premium Standard Farms/Murphy Brown, paid $2,005,867.74 in personal property taxes to Sullivan County over the same three years, 2016, 2017 and 2018, with their annual tax contribution averaging $668,622.58 over the same period.

After seeing the meat of the media tour, the press in attendance were shown to another farm belonging to Roeslein, which will have to be a story for another time given the length of this story so far, where even more conservation practices are being applied to agriculture.

The tour ended with a chef-prepared outdoor meal on a property overlooking the countryside. The meal was accompanied by live old-timey music and everyone left with a shiny new thermos and an experience resembling a magical tour through Willy Wonka’s Chocolate Factory where the Willy Wonkas were Kraig Westerbeek and Rudi Roeslein, the Chocolate Factory was the picturesque landscape of Northeast Missouri, the magic was science – and the chocolate was hog manure. 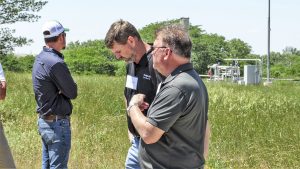 According to Butler, the technology used to capture biogas and process it into renewable natural gas is spreading throughout the United States.

“It’s starting to spread in the U.S. now, with operations beginning in Utah,” said Butler. “Who knows what the future holds worldwide, but for now – we’re growing in the U.S.”

According to information released by RAE during the media tour, Roeslein Alternative Energy (RAE) is the owner, operator, and developer of renewable energy production facilities that convert agricultural and industrial wastes, along with renewable biomass feedstocks to renewable natural gas and sustainable co-products. RAE engages in these business operations with a focus on incorporating native prairie restoration. RAE is a limited liability company with its principal offices located in St. Louis, Missouri. RAE was launched in 2012 by Rudi Roeslein, co-founder and CEO of St. Louis-based Roeslein and Associates, Inc. (a global leader in engineering, modular fabrication, and construction of industrial plant facilities).