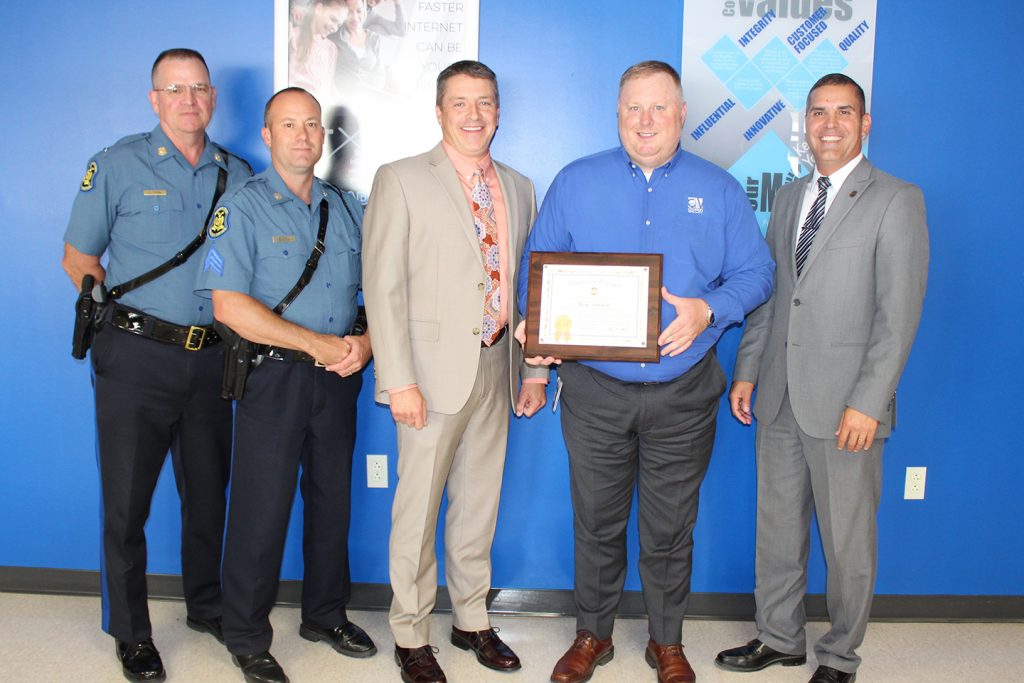 On August 15, 2019, Lieutenant Steven V. Wilhoit, assistant director of the Missouri State Highway Patrol’s Division of Drug and Crime Control, presented Macon, Missouri, resident Ryan Johnson with a Missouri State Highway Patrol Honorary Trooper Certificate. The certificate was presented to Mr. Johnson at the Chariton Valley Communications Corporate Headquarters in Macon, with his co-worker’s present. The Honorary Trooper Certificate is presented to citizens who are nominated by a trooper for performing in an exemplary manner and under dangerous conditions to aid another person, or when they unselfishly give of themselves to assist troopers in the performance of their duties.
During the early morning hours of March 5, 2019, the Chariton Valley Wireless retail store in Salisbury, Missouri, was burglarized. Mr. Johnson, the chief operating officer, was notified of the burglary. Shortly thereafter, he was contacted by an alarm company and notified of an alarm sounding at the Macon Chariton Valley Wireless Store. Mr. Johnson resides near the Macon store. He looked out the window of his residence and observed a silver F-150 turning around in his driveway. Mr. Johnson was aware of numerous cellular telephone store burglaries involving a silver Ford F-150. Mr. Johnson quickly grabbed the keys to his vehicle and left his residence to follow the truck. He also contacted local law enforcement by telephone and advised them about the incident and the location of the truck. The occupants of the truck were aware they were being followed and attempted to evade Mr. Johnson. Mr. Johnson followed the truck to the New Cambria area as local law enforcement officers began to converge there. As the law enforcement presence was increasing, the two occupants abandoned the vehicle and fled on foot. They were not immediately apprehended.
A search of the vehicle revealed over 150 cellular telephones and tablets stolen from the Chariton Valley Wireless stores in Macon and Salisbury, Missouri. The phones and tablets have a retail value of approximately $148,000. Due to this recovery, and subsequent investigation, two suspects were identified and linked to over 50 burglaries of retail phone stores in a six-state region. In total, the two suspects were responsible for the theft of over $1 million of cellular phones and tablets. Both suspects were recently arrested in Kansas City, Missouri, and indicted for their crimes in the United States Federal Court of the Western District of Missouri.
Mr. Johnson’s attentiveness and quick action on the morning of March 5, 2019, was paramount to the identification and subsequent indictment of the two suspects. Mr. Johnson acted selflessly and placed himself in a difficult situation. His actions quickly placed $148,000 of merchandise back of the shelves of his employer and ended a crime spree. The Honorary Trooper Certificate is a way for the Patrol to express appreciation to Mr. Johnson for his dedication to his employer and the safety of his community.
The only 100 percent survivable traffic crash is the one that never happens. Make sure everyone in the vehicle is properly restrained in a seat belt or child restraint. Every day as we travel on Missouri’s roadways, we trust that every driver on the road is going to obey the speed limit, pay attention, and drive sober. “Don’t Violate The Trust.”
Follow Troop B on Twitter for the most current news @MSHPTrooperB.