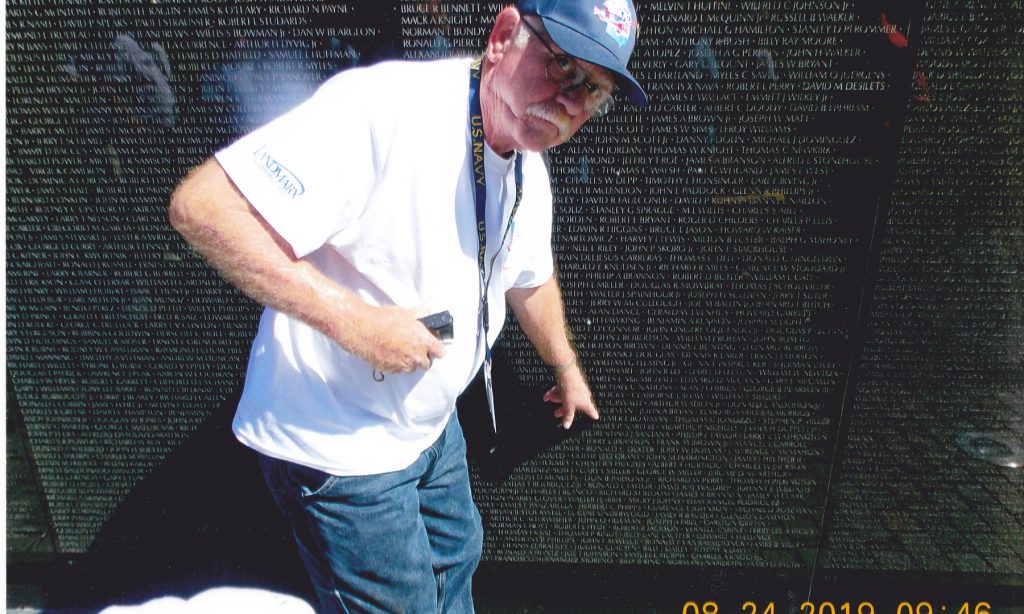 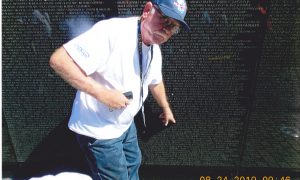 At the Vietnam Veterans Memorial, Stanley Jenkins points out the name of Elmer Boatman, a Marine from Wayland, who was killed in action in 1966. 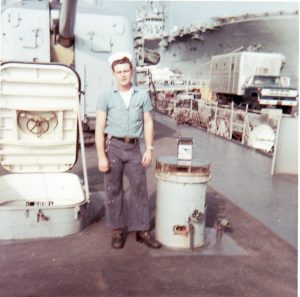 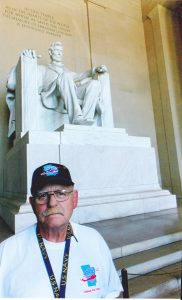 Below) Jenkins was impressed by the Lincoln Memorial.

This week, I had the opportunity and privilege to speak with a local gentleman about his wonderful experience and special opportunity of being able to go on a Great River Honor Flight.

Mr. Stanley Jenkins, from Luray, explained to me that he had the opportunity to do an Honor Flight this past August.

He told me about how he was in the military.  He explained to me that he started in the Navy, and had joined the Navy, Feb. 24th, 1967.

“I was in Chu-Lai, Vietnam, and I was on land there and then I was in the Navy, and I worked at Naval Support Activity Detachment, (NSAD). I was also a security guard at a checkpoint at the POL Tank Farm,” he said, When I was on the sea, I would do bunker watches along the South China Sea,” he added.

Jenkins told how he was active in the Navy, and then moved into the Navy Reserves for three years, and then he joined the National Guard in 1975, serving for five years.

I asked him what his rank was, and he had told me that when he was in the Army Reserves, he was a Drill Sergeant and Senior Tank Commander and that he retired as an SFC (Sergeant First Class) from the Army.  He spent a total of 27 years in the military.

I asked him about his Honor Flight experience.  He was very happy and pleased with the way that it had turned out for him.   He had to wait two years before he was able to go, but the wait was worth it.  The date of the Honor Flight that he was able to join was August 24th, 2019.

“We left Hannibal on a bus at 2:30 a.m. to go to St. Louis.  Then we flew from St. Louis to Baltimore, Maryland.  Then we were bused to Washington, D.C. to the Lincoln Memorial.  We also got to see the statue of Abraham Lincoln,” he said.

Everything was provided for the veterans on the trip, they did not have to buy food or anything.

I asked him, “What about this trip seemed important to you?”

“What was important, was the way that there was a reception that was held for us when we had got into Baltimore, and that it was exciting and great to see because they had all the military greeting us as we arrived,” he answered,“The memorials were exciting because I had never seen then until then.”

He said that all of the memorials were exciting to see.

He explained how it was really neat because they had been escorted by the police to see the memorials, and they did not have to stop on the road at all.

They also got to see the Arlington Cemetery.

Jenkins was also moved by the welcome they received when they returned home.

“When we come back by Bowling Green, we had an escort of around 189 motorcycles to escort us to the Hannibal College.  Every overpass people were up there waving as we would pass through. That’s the first reception that I have had since I had joined the service.  I thought that this was fantastic.  I think that all Veterans ought to try to go onto the Honor Flight, and they won’t be sorry if they do,”  Jenkins said.

He said he was really glad he got to do this, and this one time was enough for him.

I would like to end this with saying, thank you for your service, Mr. Jenkins.   It was well appreciated.

And, thank you for sharing your experience with us about the Honor Flight.