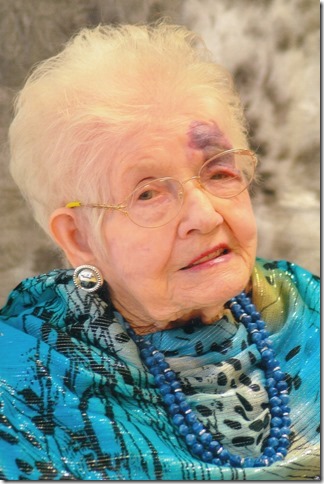 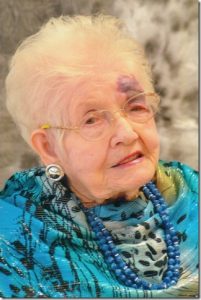 Martha V. Coop age 99, formerly of Wayland, passed away Saturday, October 5, 2019, in the Clark Co. Nursing Home in Kahoka.
Martha was born May 2, 1920, at home in the Alexandria bottoms, the fourth from the youngest of nine children, to Alfred and Emma Bryant Eddleman.
Her youngest brother died shortly after birth and her mother not too long after.
She attended school through the eighth grade but they lived too far away to go to high school.
Due to her mother’s death, it was her and her sisters’ jobs to care for the general needs of the family including cooking, cleaning, and doing the wash.  She also helped raise watermelons and muskmelons to sell.
On September 26, 1936, she was united in marriage to William Coop who preceded her in death on February 22, 1994.
Survivors include one daughter, Cheryl (Jack) Rennaker of Branson, MO, one grandson, Michael (Shannon) Rennaker of Florida; two great-grandchildren, Janae (Nick) Martinez of Florida and Aerin Rennaker of Florida; a great-great-granddaughter, Gabriella Martinez of Florida, whom she recently was able to meet for the very first time; several nieces and nephews and their families including special nieces and nephew who devoted a lot of time and care for her, Bob and Linda Eddleman, Lori Anderson, Kelsey Watkins, Kourtney and Kyle Anderson, Robbie, Lucas and Owen Eddleman, and Dena Norman.
She was preceded in death by her parents; her husband; a son, William Ernest Coop; five brothers Floyd, John, Fred, Frank and Ray; sisters, Esther Hess, Elizabeth Value, and Alice Jones; and several nieces and nephews.
Bill and Martha anxiously looked forward to the birth of their child who lived only a day or two following birth.  They were blessed and delighted ten years later to give birth to their daughter Cheryl.  Martha loved being a homemaker.  She often babysat and took in washing to help with their day to day needs.
She was an active member of the First Baptist Church in Wayland and had been a Sunday School teacher, Bible School Teacher and also volunteered in the nursery and could be found working in the kitchen whenever there was a big meal.
She enjoyed gardening and taking care of her flowers.  She was an avid “weed puller” even if it wasn’t in her yard!  She always loved to visit with others.
Funeral services were held at her beloved church, First Baptist in Wayland, on Wednesday, October 9, 2019, at 1:00 P.M. with Rev. Dan Deatrick and Rev. Eugene Spurgeon officiating.  Heidi Fox was pianist, and Dan Fox was vocalist.  Special music was “Good Night and Good Morning” and “Safe in the Arms of Jesus”.
Pallbearers were Kelsey Watkins, Tony Anderson, Kyle Anderson, Robbie Eddleman, Lucas Eddleman, and Owen Eddleman.
Burial was in the Frazee Cemetery.
Visitation was held at Wilson Funeral Home afternoon on Tuesday with family receiving friends from 6-8 p.m.
Memorials may be made to the family.
On-line condolences may be expressed at www.wilsonfuneralservice.com.
Posted in AREA OBITUARIES