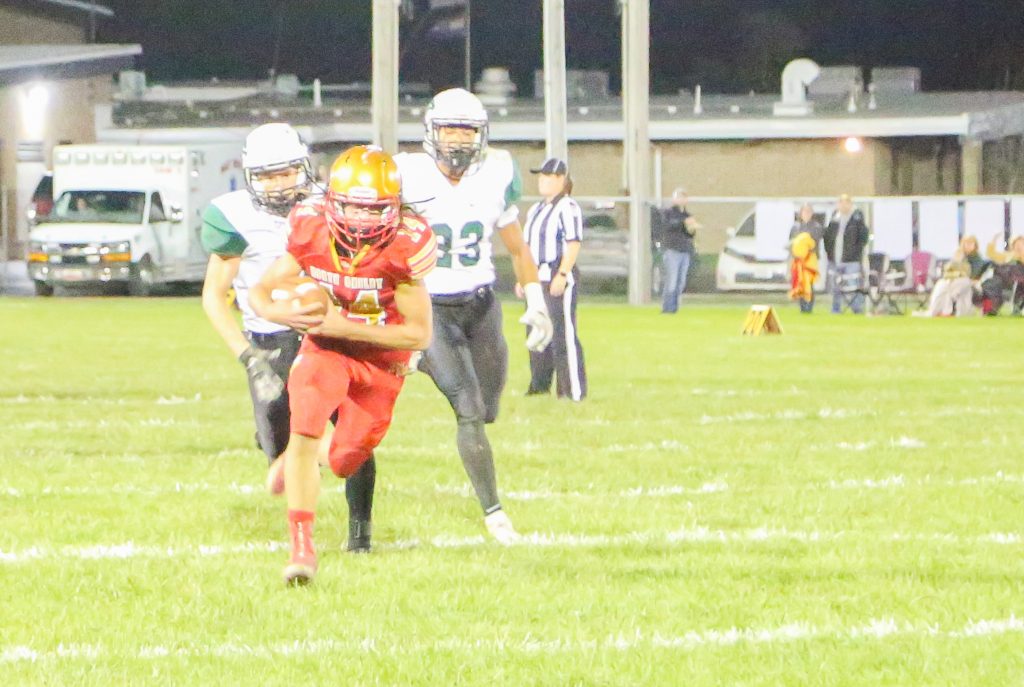 The confluence of events during North Shelby’s game against top-ranked Pattonsburg on Friday, Oct. 18 led to an unprecedented result.

The Raiders held off the Panthers 92-88 (180 points) in the highest-scoring high school football game in Missouri history. Before an emotionally juiced-up North Shelby crowd, the two teams combined for an incredible 86 points in a wild, hour-long fourth quarter.

With the victory, NS jumped to No. 3 in the Week 9 eight-man football media poll released Monday, Oct. 21. East Atchison is ranked first. Pattonsburg dropped to second. The Raiders received one first-place vote from among seven pollsters.

Friday’s shoot-out went to the end.

Trailing 92-80, Pattonsburg quarterback Steven Willhite made a five-yard touchdown rainbow lob to Patrick Cowley with 1:09 left in regulation; then passed for a successful two-point conversion.

On the ensuing kickoff, the Panthers (7-1) executed their only successful on-side kick of the night taking over at the NS 36 yard line. Willhite threw a lengthy screen pass to the east sideline to Brett Emig who, in turn, passed toward the Raiders’ end zone. Defensive back Cale Stoneburner snared the third of his three interceptions to ensure his team’s historic victory.

“Right when they lateraled it, I saw one guy go vertical and I knew they were going to try to pull something off,” Stoneburner said. “Somebody rushed him (Emig), I don’t know who it was, but he threw a real wobbly ball that was up in the air. I went under it and caught it.”

“That was a bone-headed play call on my part. It was a trick play; we shouldn’t have done it,” Cavin said. “I’ve just got to keep the ball in the quarterback’s hands. There was a reason why we were where we were at.

“Hat’s off to them. Up-front, they’re better than anybody else we’ve seen,” Cavin continued. “That’s a good football team. If we can take care of business, I plan on seeing them again in November.”

North Shelby linebacker Kyle Smith, who also had an interception for the Raiders, echoed Cavin’s thoughts that defensive line pressure on Willhite was important.

“Jackson Lunsford, Panda (Andrew Pantaleo) and Luke (Schwanke), they were all over that quarterback, which really helped us with our picks.”

North Shelby quarterback Dayton Mettes finished the game with 251 yards rushing with four touchdowns. Mettes was 13-of-19 passing for 135 yards and two TDs. Ethan Geisendorfer ran for 124 yards and five touchdowns while catching another. Elijah Greenwell picked up 95 on the ground and a pair of TDs. The Raiders (7-1) rushed for a total of 474 yards.

“We had an excellent front-line push, probably the best in all the four years I’ve been here,” Mettes said. “They were just dominating up-front. The reads were easy and runs were easy. This game was on them.”

Willhite passed for 507 yards and accounted for 12 Pattonsburg touchdowns.

“Dayton is a rock,” Raiders coach Seth Bass said. “We can always rely on him for running the offense, running physical and getting everybody lined up, seeing what the defense is trying to do and take away. He was exceptional.”

The Raiders conclude the regular season Oct. 25 hosting ninth-ranked Orrick for the Central Rivers Conference championship. The Bearcats (6-2) are coming off a 72-18 win against Osceola.

“I believe we will come out fired up ready to get that conference title,” Mettes said. “Every week … one at a time. We’ve just got to focus on us.”

NOTES: North Shelby and Pattonsburg combined for more than 1,200 yards total offense … NS led at halftime 44-18 … late in the third quarter, Mettes threw a six-yard TD pass to sophomore Dylan McEwen on a lineman-eligible play … during the bizarre fourth quarter, four touchdowns were scored on seven offensive plays … time of game was three hours and 18 minutes.