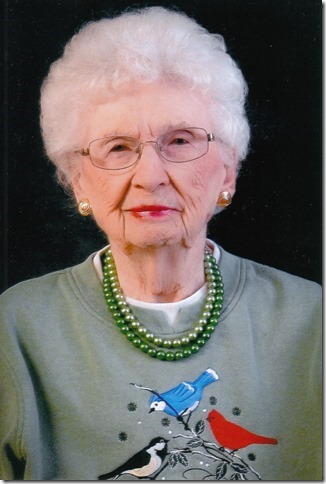 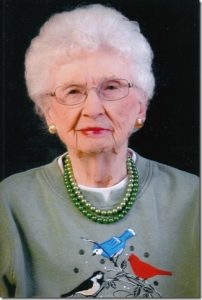 Ione was born March 8, 1922 in Boone, IA, a daughter of Azel and Emma Sherrard McClain.

Prior to her marriage she worked at the Ordinance Plant in Ankeny, IA and also at Ben Franklin in Boone, IA.

She was united in marriage to Otha Edward Gilbert on March 25, 1944 in Boone.

She went to Georgia with Eddie until he was sent over seas during World War II.

While in Georgia, she worked at a peanut factory before returning to Boone when he was shipped out.

She and Eddie moved to Kahoka in 1949 to make their home.

She later worked at Ben Franklin in Kahoka and then for the City of Kahoka for 13 years.

Ione enjoyed all of her grandchildren and families.

She loved travel, many times taking  Olive and Arthur Evans with her and Eddie.

Her last “big trip” was in August of 1998 to Alaska with Rose and her cousin, Joan, to visit Joyce and family, and first time on a plane.

She also loved to shop and go to the Clark Co. Senior Center.

She loved tending to her flowers, gardening and watching birds.

Ione was a faithful and devoted member of St. Michael’s Catholic Church and the Altar and Rosary Society.

She was the oldest parishioner at her death.

Special music “Here I Am, Lord” was by grandchildren and “Peace in Christ” by great great Granddaughters.

Visitation was held at Wilson Funeral Home in Kahoka after 9 a.m. Thursday.  Rosary will began  at 4:30 p.m. followed by family receiving friends from 5 p.m. until 7 p.m.

Memorials were suggested to the St. Michael Altar and Rosary Society.