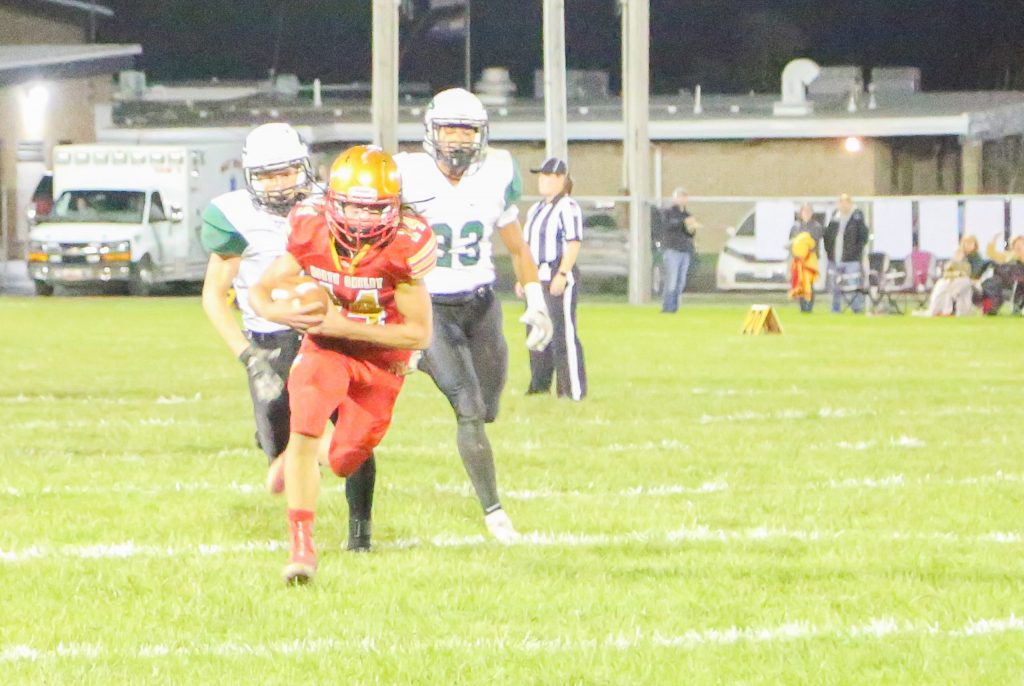 North Shelby avenged its eight-point loss more than two weeks ago to Orrick in decisive fashion.

Dayton Mettes ran 16 times for 185 yards, including a 65-yard dash, and four touchdowns as the Raiders punished the Bearcats 54-6 in the rematch Friday, Nov. 8 at Orrick.

Ethan Geisendorfer rushed for 192 yards on 31 carries and a TD. Justin Lunsford also scored a touchdown, as did lineman Carson Mesmer.

In total, the Raiders racked up 459 yards on the ground and seven touchdowns while converting on 6-of-7 two-point attempts, three by Geisendorfer. Conversely, NS attempted only six passing plays the entire night. One was intercepted.

Defensively, Mesmer had a team-high eight tackles (seven solo) with four for loss as North Shelby pressured the Orrick backfield and quarterback Blake Buchanan. Jackson Lunsford added two tackles for loss. Landon Bender had an interception for the Raiders.

“Carson had a big night. Outside of two broken plays, we contained Buchanan,” NS coach Seth Bass said. “Probably 65 of their 98 total rushing yards came on those two plays.”

This week (Nov. 15), the Raiders travel to Ludlow, southwest of Chillicothe, for a state quarterfinal and district championship tilt with the Southwest-Livingston Wildcats.

Southwest is 9-1 having defeated Stewartsville last week 80-6. Since a 68-22 season-opening loss to top-ranked East Atchison, the Wildcats have reeled off a nine-game winning streak.

Southwest has only been seriously challenged once since and that dates back to its Sept. 6 Week Two win, 66-62, at South Holt. Mound City did provide a competitive game at times in Week Four, but the Wildcats ended up winning 58-34.

North Shelby and Southwest have no common opponents this season.

Southwest’s quarterback is 6-6, 205-pound Mack Anderson. The senior is his team’s prime rushing threat, similar in size to that of the Raiders’ Week One opponent’s QB: Waco Community’s Nik Coble.

“This kid is a clone of him (Coble),” Bass said. “Obviously, we’ve seen some good quarterbacks with Steven Wilhite of Pattonsburg and Buchanan. He’s (Anderson) another one. It all starts and ends with him.”

Against Stewartsville, Anderson rushed for 208 yards and scored six touchdowns.

Southwest appears to have good size with its roster listing nine players at 190 pounds or more, five of them 200 or higher.

The winner of Friday’s contest will play the winner of Pattonsburg-Worth County on Saturday, Nov. 23 in the state semifinals. Bass indicated if the Raiders were to defeat Southwest, North Shelby would host the semifinal game.

The other side of the bracket has Drexel at Appleton City and East Atchison hosting Mound City.

The eight-man state championship game will be Saturday, Nov. 30 at Faurot Field in Columbia beginning at 11 a.m.