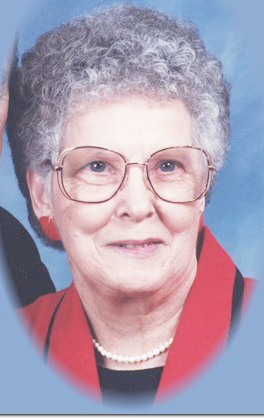 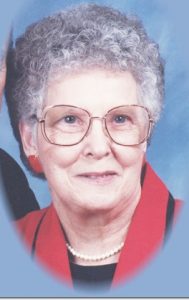 Bertha Mae (Stewart) Christy, age 93, of Revere, MO, passed away Sunday, December 8, 2019 at her daughter’s home in Morgantown, IN surrounded by her loving family.

Bertha Mae Christy (Stewart) was born fifth of seven children in Humphreys, MO to Hugh and Ruth (Vincil) Stewart on May 22, 1926.

She moved to Clark County when she was 8 years old. At 14 years old, she was “Saved” by her Lord and Savior at Anson Church at a revival meeting and was subsequently baptized in Farmington, IA in the Des Moines River.

He stole her heart and they were married November 6, 1946.

Seventy years later, she still gushed and remarked that “it was just meant to be”.

For twelve years, Bertha Mae earnestly tended her garden as they grappled with their dream of becoming parents.

In 1958, she and L.D.’s prayers were answered when they adopted their first daughter, Veva Kay (Hall).

Three years later, in 1961, they completed their family with the adoption of Tena Mae (Smith).

Her life revolved around her faith and her family and her love for them.

Bertha Mae worked in a telephone office and in accounting at Moore Business Forms in Kahoka, MO but her contribution to the community was not limited by her employment.

Throughout her entire life, Bertha Mae cared for others more than herself and sacrificed her time and effort, not only for her family but her community as well.

She said, “I just love people.to pieces” and she was such a brilliant example of Christian Love.

She was the spiritual hub of her family, community, and of her church, often teased that she had a “direct line” to God.

Her spiritual strength is her legacy. She was a faithful member of First Baptist Church of Wayland, MO and proud member of Delphinium Garden Club.

She lived in Revere, MO in their family home with much support from many local loved ones.

She would spend much of the year visiting her daughter, Tena Mae and family in Morgantown, IN, where she passed Sunday, December 8th surrounded by her loving family.

Very special nieces in her life that helped her stay in her own home were Betty Oilar, Margaret Krebill and Sandy Oilar; as well as dear friend, Sandy Lucas.

She was preceded in death by her parents; her daughter, Veva Hall; brothers and sisters, Veva and Hugh Oilar, Shirley Ann Stewart, Robert Stewart and wives Ruth and Elgeva, Harr and Mary Stewart, George and Tillie Stewart, and Bill Stewart.

In her own words: Just get out in the yard, dig in the dirt in your flowers. That’s the best therapy in the world! And it is! I would even get out and when it was raining and showering a little bit, I’d walk in the rain! I got through it! I just get strength from the Lord because there has been times when I have my heart falter and I just did not know if I could do another thing or not. I just pray and ask God for strength. God’s been real good to give me strength. He really has! God knows all about it and he’ll take care of me. He’s been really good to me, really, really good to me.”

Funeral services were held on Saturday, December 14,1 2019 at 10:00 a.m. at the First Baptist Church in Wayland, MO with Pastor Dan Deatrick officiating.

Selections were “Suppertime”, “Going Home”, and “The Lord’s Prayer”.

Visitation was held after 9 a.m. Friday at Wilson Funeral Home in Kahoka with family receiving friends from 5-7 p.m.

Memorials were suggested to the First Baptist Church in Wayland or the Revere Cemetery.