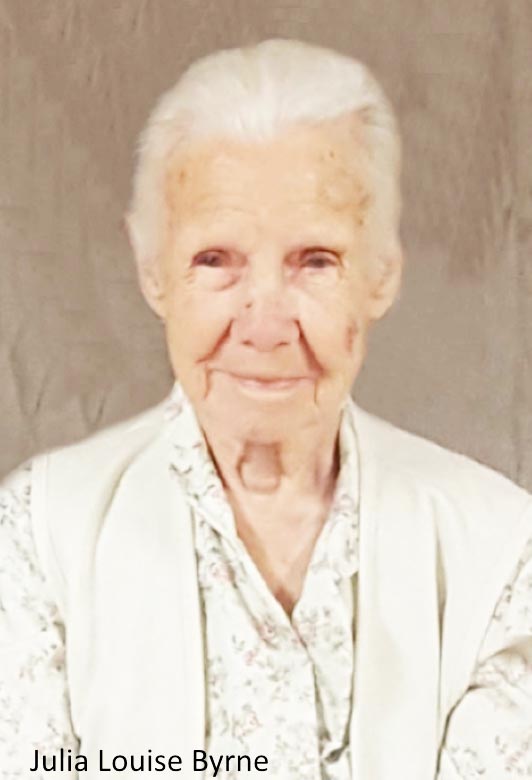 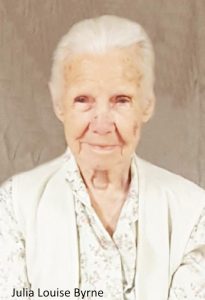 She was born on August 19, 1918 in Albia, IA, the third child and first girl to David Lee and Sarah Belle Allison Bush.  At the age of seven she was adopted by Charles and Bertha Cox.

On September 27, 1937 Louise was united in marriage to Harold “Ray” Byrne in Kahoka, MO. To this union were born two children, Sharleen and Marciene.  Ray preceded her in death on December 18, 1977.

Louise was a member of The Church of Jesus Christ of Latter Day Saints and was baptized on October 31, 1927.

She had been employed at Graham/Keokuk Area Hospital in the obstetrics department for thirty years.

Louise enjoyed canning, quilting, embroidery and spending time with her family. After her retirement she made many mittens and stocking caps for babies which were given to the newborns in the hospital.  She enjoyed playing solitaire and probably played over two million games. She also enjoyed working on her family genealogy.

Besides her husband, she was also preceded in death by her parents, two daughters, Sharleen Marie Byrne and Marciene Louise Dietzman and a great-great-granddaughter, Elaina Marie White.

A graveside service will be held at 11 a.m. Friday at Sunset Memorial Garden in Keokuk with Branch President Brian Johnson officiating.

Visitation will be held on Friday from 10 am – 11 am at the Vigen Memorial Home in Keokuk with family meeting with friends at that time.

A memorial has been established.