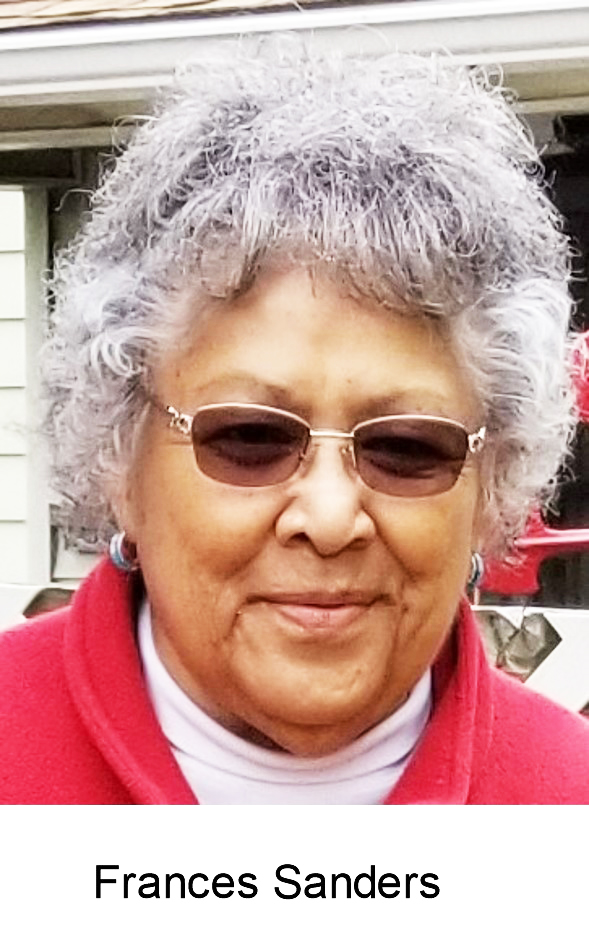 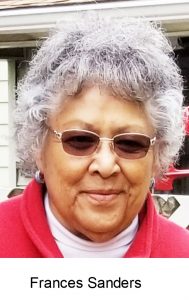 She was born August 1, 1942 in Tahlequah, OK, the daughter of William (Cherokee tribe) and Agnes Morris (Choctaw tribe) Glory. She was the fourth child of six born to Bill and Agnes.

Her father gave her the nickname “Ginny” (like the guinea fowl) as it seemed she was always jumping around doing this and that and hardly ever stood still, so one day her dad just told her she was just like one of the guineas they had in the yard and it stuck.

Frances graduated from Northeastern State University in Tahlequah, OK with a major in Physical Education.

After college she and a friend traveled to Iowa after a representative of Keokuk schools went down to Northeastern State University to recruit teachers.

She met Frank Sanders on that trip and nineteen days later on February 19, 1965, they were married at the Alexandria Presbyterian Church in Alexandria, MO.

They were happily married for fifty-five plus years.

She had to return to Northeastern State University to pick up more credits for teaching in Iowa so Frank spent a lot of time on the road that first summer of their marriage.

She then came back to Iowa and attended Western Illinois University in Macomb, IL and obtained the remaining credits to start teaching.

She taught in several schools in Keokuk and ended her teaching career as the art teacher at the Keokuk Middle School where she retired on June 30, 2004.

During her time teaching she also did some coaching and served on the Keokuk City Council.

She was also the co-owner of Southeast Iowa Aluminum Foundry.

Frances was a member of Alexandria Presbyterian Church in Alexandria, MO, where she served as an elder and was on many boards for the church.

She loved art in all forms, the brighter the better, also anything that related to her Indian heritage.

She collected many, many things from Noah’s arks to Beanie Babies and everything in between.

Her house reflected this and she surrounded herself with all these things.

The walls and shelves of the house display her collections everywhere.

Her favorite hobby had to be shopping.

She had so many people she would buy gifts for and each one was very special to her.

She would search until she would find just that perfect gift and it gave her so much joy to be able to present that gift to them and watch their reaction to it.

Her absolute favorite thing was her family.

Standing out amongst all her collections are pictures of the family.

There is not a space in the house that does not have a photo of someone dear to her.

Photo albums line the shelves, full of the pictures that loved ones have sent her through the years.

She could tell you who was in each picture, when it was taken, what the occasion was, and usually a story to go with it.

She was a wonderful woman who enjoyed her family and friends immensely, she was strong in her ways, but even stronger in her love.

She will be greatly missed.

She is survived by her husband Frank Sanders of Keokuk, two daughters, Laura (Jeff) Townsley of Okmulgee, OK and Teresa (Scott) Nichols of Keokuk, one son, Frank (Holly) Sanders of Winchester, VA, many grandchildren, and great grandchildren, a sister, Maxine Glory of Tahlequah, OK and many nieces and nephews.

In lieu of flowers, memorials may be given to the family to purchase a park bench in Keokuk Rand Park in memory of Frances.

There will be a small dedication memorial at the time the bench is placed.