Scotland County, MO – Thursday, May 5, 2022 – Two vehicles were stolen in Scotland County early Thursday morning, and both were involved in crashes not long after, which has kept local law enforcement busy.

“The first truck was stollen at 3:10 this morning from Prairieland FS in Memphis. It was a three-quarter ton white Chevy pickup,” Scotland County Sheriff Bryan Whitney told the Memphis Democrat. “Also this morning, we responded to a different crash on State Route A south of Arbela for a report of a rollover vehicle accident where the driver was ejected. When I arrived, I realized whose truck it was – and it wasn’t the person driving. While I was on the scene of that call, I got a call that the white Prairieland FS pickup was found wrecked on State Route U and County Road 461. I responded and secured that vehicle for evidence.” 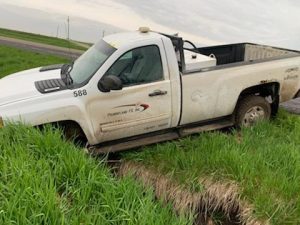 The vehicle stolen from Prairieland FS was recovered with minor damage.

According to a Missouri State Highway Patrol crash report, the rollover crash on State Route A involved a 2013 Dodge Ram truck being driven by Caleb J. Doyle, 24, of Wyaconda, MO. The crash occurred at approximately 5:00 a.m. when Doyle, who was southbound approximately one-half mile south of Arbela, traveled off the right side of the road. The vehicle overturned and Doyle was ejected. He is listed as being seriously injured in the crash. The stolen vehicle is listed as being totaled. 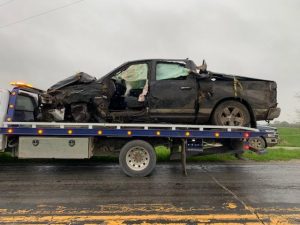 According to Sheriff Whitney, Doyle was booked and released because of his injuries. He has been taken to Columbia, MO, for medical treatment.

According to an MSHP arrest report, Doyle is charged with tampering with a motor vehicle, driving while intoxicated, and failing to drive on the right half of the roadway.