The Illinois All Star teams continued a long run of dominance of a series of area High School All Star basketball teams played in Quincy, Illinois. The Muddy River News organization has picked up sponsorship of the series, currently referred to as the Muddy River Showcase.

The contest featured graduating senior basketball standouts from Illinois and Missouri. The Illinois girls team led most of the way, taking a 67-55 win. Illinois led 33-27 at the half. Illinois went on a nine point run to a 54-42 lead after three periods of play.

Missouri tried to take advantage of Illinois only suiting up six players with a fourth quarter full court press. Missouri MVP Hannah Feeney of Scotland County HS scored late in the game for a 64-55 deficit.

“It was a lot of fun to come back out one last time,” Hannah Feeney told the Memphis Democrat. “We had an all-star game last week. It was fun knowing this was the last one. We got one last Hurrah.”

The Missouri All Stars were heavy on point guards. “It was hard, we were all waiting on outlet passes,” Scotland County guard Hannah Feeney said. “Definitely rebounding, getting the boards when we needed it,” Hannah Feeney said when asked about the contribution Alyanna Whitaker made to the Class 2 District Champion Lady Tigers this season.

“We didn’t come up against a lot of zones, but when we did Alaynna would always get rebounds out of it,” Hannah Feeney said. “It was nice to know that I could always look for the outlet pass because she always got the ball.”

Hannah Feeney told the Memphis Democrat she planned to attend the University of Missouri at Columbia this fall to study Nursing.

The taller Illinois team out scored Missouri 32-18 in the paint. Illinois led 18-4 in second chance points. The Illinois team scored 40 points off the bench to 13 for Missouri.

Jaedyn Robertson of Monroe City was in double figures with ten points. Jacob Becker of Knox County scored eight points with a team leading eight rebounds. Drew Mallett and Cameron Bringer of Highland along with Alex Loman of Palmyra participated but did not score.

Greg Altmix of Liberty HS coached the Illinois All Stars. Greg Altmix coached at Highland several seasons ago. “When you walk into the halftime of an all-star game and ask the guys when we need to do better and they say defense,” Greg Altmix said.

“You don’t hear that very often in an all-star game. Those guys came out with a mission in the second half,” Greg Altmix said. “I said to keep it simple, but we had to get some more movement on offense. Those guys did that.”

“If we take it to the basket in the second half. Right now we were just passing it around on the perimeter,” Coach Altmix said. “They were able to stay out and guard. When you have great athletes, great basketball players they do the little things right.”

The Missouri All Stars were coached by Brock Edris of Monroe City and Brock Butler of Highland. 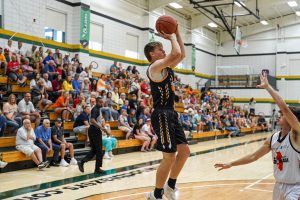 HIGHLAND ALUM SHOOTS AT QUINCY ALL STAR GAME-Drew Mallett is shown shooting over the Illinois defense during the June 18, 2022 Muddy River Showcase at John Wood CC. Illinois blew the boys game open in the second half for a 95-55 win. Photo by David Sharp.