Newark, MO – Tuesday, November 22, 2022 – A rural Newark man and his two dogs were forced from their home by fire late Tuesday afternoon. One of the dogs was nearly killed in the fire but was rescued by firefighters and medical personnel.

According to firefighters at the scene, the fire began in a burn barrel and spread to two nearby sheds and a house on the property.

A person passing by, Brandon Wolter of Knox City, saw the smoke and stopped to help. Wolter reported seeing smoke and finding the occupant, Bill Peterson, trying to rake leaves away from one of the burning structures. Peterson asked Wolter for help to remove his late wife’s ashes from the house.

Wolter went into the house to retrieve the ashes. He reported not being aware the house was on fire before going in. Despite finding the house was full of smoke, Wolter was able to locate the ashes and remove them from the burning house.

Peterson reportedly also went back into the front of the home, which had yet to be overtaken by fire. He was helped back out to safety by fire personnel arriving at the scene.

Once firefighters gained access to the home, a dog named Lucy Lou was located inside.

“Three of us went in and found her lying on the ground,” said Western Lewis County Fire Protection District Firefighter Zachary Sharpe. “When we gained access to the one room we went around the corner and she was laying right there on the ground. Me and one of the other firefighters from Newark rolled her in a blanket and got her out of there immediately.”

Once Sharpe exited the house with Lucy Lou, he yelled for help handing the dog off to fellow firefighter Robbie Walter. Walter rushed the dog to a nearby Knox County Ambulance.

From there, Paramedic Deanna McKenzie and EMT Dave McGinnis administered oxygen and gave the dog a breathing treatment.

“We thought she was going to die,” said Paramedic Deanna McKenzie who administered oxygen and an albuterol breathing treatment using a mask made for humans. “She was barely breathing, not moving. All of a sudden, she took a deep breath and did a big sigh. She came back.”

Lucy Lou regained consciousness and eventually started sniffing the first responders. A short time later she was able to walk.

The rescue was a high point at an otherwise dismal scene. Both of the sheds were destroyed by the fire and the home sustained devastating damage.

The other dog on the property, Lizzy, was outside of the home during the response. She was not injured in the fire.

Peterson and his two dogs went to stay with a family member overnight. According to McKenzie, the American Red Cross has been notified, and has plans to follow up with support for Peterson who has been displaced by the fire. 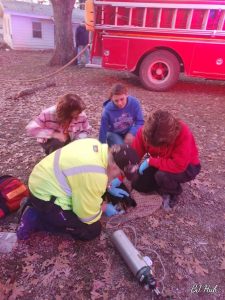 Lucy Lou the dog is shown being given oxygen by medics after being pulled from a burning home Tuesday afternoon, November 22, 2022, northwest of Newark, MO. Photo by Brandon Wolter

Missouri State Budget Is Bulging With $6 Billion In Surplus Cash