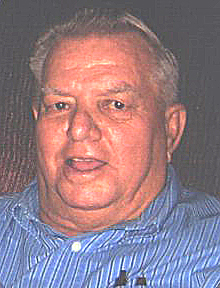 He was born at home near Kahoka, MO, on July 16, 1939, one of thirteen
children and a twin, born to Harold and Marguerite Parsons Barry.

On November 13, 1960, he was united in marriage to Nancy Horner at the Bluff
Springs United Methodist Church, rural Canton, MO.

Survivors include his wife, Nancy, of Canton, MO; his mother-in-law, Betty
Horner also of Canton; a son, Jay Barry and a daughter, Debbie and Darrell
Winters all of Canton, MO; four grandchildren: DeAnn and Pat McNally of Keokuk,
IA, Darin Winters and Jackson and Matthew Barry, all of Canton, MO; two
great-granddaughters, Kiersten and Kiera McNally; twelve brothers and sisters:
Margaret and Max Byers of Kahoka, MO, Betty and Tom Logsdon of Kahoka, MO, Dean
and Jan Barry of Clark, MO, Arthur and Marilyn Barry of Titusville, FL, his
twin, Donnie and Janice Barry of Wayland, MO, Floyd and April Barry of
Canton,MO, Vernon and Carol Barry of Davenport, IA, Dorothy and Dean Hunziker
of Kahoka, MO, John and Sharon Barry of Keokuk, IA, Barbara and Wesley Parrish
of Kahoka, MO, Connie and Gary Watson of Fredericktown, MO, and Patricia and
Bob Higgins of Broken Arrow, OK; brothers-in-law and sisters-in-law, Ronnie and
Linda Horner and Carolyn and Kenny Collins of Canton, MO; as well as nieces,
nephews and other relatives.

He was preceded in death by his parents; his father-in-law, Marion Horner; a
brother, David Harold Barry in December of 1948; three brothers-in-law: Ralph
Ludwig, Dewey Soper and Donald Lunt; and a sister-in-law, Carol Barry.

Ronnie graduated from Kahoka High School in 1957. He attended every class
reunion and kept many close relationships with his graduating class. He was an
over-the-road truck driver all of his life and received several certificates
for safety. After he retired from trucking it wasn’t too long before he was
ready to get back on the road and bought his own truck and drove until his
health forced him to retire again. He enjoyed retirement this time, spending
time on his 4-wheeler, checking on livestock and the farm and helping Jay. He
also enjoyed his morning visits at the coffee shop in Wayland and visiting with
his friends there.

Family was the most important thing in Ronnie’s life. He came from a large
family and kept a close relationship with his siblings and their children and
grandchildren. He was a devoted father and grandfather and would have Nancy
cook extra so the kids and grandkids could come eat with them several times a
week and stay and play a game of cards. He also loved playing cards with
extended family and friends.

Funeral services were held Friday, July 17, 2009, at 10:30 a.m. at Wilson
Funeral Home in Kahoka with Rev. Russell Branch officiating. Special music
“What a Day” was provided by his great nieces, Janice Barnes, Misty
Osbon, and Faye Book. Additional music was a recording of “One More
Day”.

Burial was in the Bluff Springs Cemetery.

Visitation was held after 9 a.m. Thursday with family receiving friends from
6-8 p.m. at Wilson Funeral Home.

Memorials were suggested to the American Diabetes Association or the Clark
Co. Dollars for Scholars.