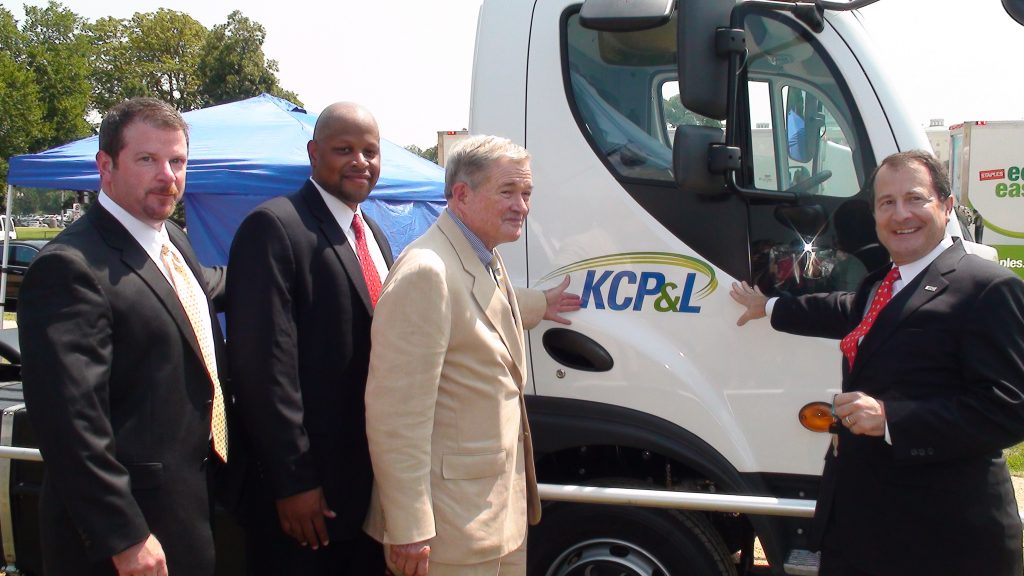 “Last summer’s high
gas prices were the latest warning that we must have a comprehensive solution
including investment in alternative energy technology if America is ever to be
in control of its own energy future.  Smith Electric Vehicles U.S. is responding
to the challenge. And so too are the companies here today who are switching from
gas to electric-powered vehicles,” said Bond.  “I am particularly proud of the
role my home state of Missouri is playing in this vision for a clean energy
future.”

Bond,
who serves as Ranking Member of the Senate Committee on Environment and Public
Works Subcommittee on Green Jobs and the New Economy, praised representatives
from Coca-Cola, AT&T, Staples, Pacific Gas and Electric Company and Kansas
City Power and Light for switching to the all-electric, zero-emission Smith
Newton vehicle.  Bond explained that the Smith Newton can travel at normal roads
speeds and go 100 miles on a single charge, making it perfect for use by
companies operating large fleets that generate much of the nation’s greenhouse
gases.  By taking some of the biggest gas-guzzlers off the streets, this switch
to the Smith Newton will improve the companies’ fleets, increase fuel economy,
reduce pollution, and help decrease our dependence on foreign
oil.

Also,
Bond commended Smith Electric for not only investing in America’s clean energy
future, but also for investing in American jobs.  Earlier this year, Smith
Electric announced the location of a new assembly line of Smith Newton trucks in
Kansas City, which will create 120 new jobs by 2010.  The Senator stressed that
these good-paying, family-supporting manufacturing jobs are exactly the kind of
cutting-edge, high-tech jobs we want to see created.  Smith Electric U.S. is
also working with Ford Motor Company in Kansas City to build a
electric-battery-powered version of Ford’s Transit Connect, a commercial
light-duty van. Ford expects to make the vehicle available in some U.S.
dealerships next year.

“Excuse
me for bragging a little, but Missouri is already a leader in alternative energy
technology,” said Bond. “All of this exciting new alternative technology
produced in Missouri and across the nation not only means a cleaner environment
and energy future, it also means jobs. Thank you to Smith Electric for investing
not only in America’s clean energy independence, but also in American
workers.”

During
the event, Bond pointed out that Missouri is an historic leader in batteries
with its vast lead deposits and manufacturing base.  The Senator stressed that
Missouri is home to the Ford Escape and Mercury Mariner hybrid
plant and Kokam in Lee’s Summit which is producing superior lithium polymer
batteries for Smith Newton and pushing the cutting-edge of modern battery
technology that makes batteries lighter, smaller and more powerful.

Committees Choose Commissioner Candidates to be on the November Ballot