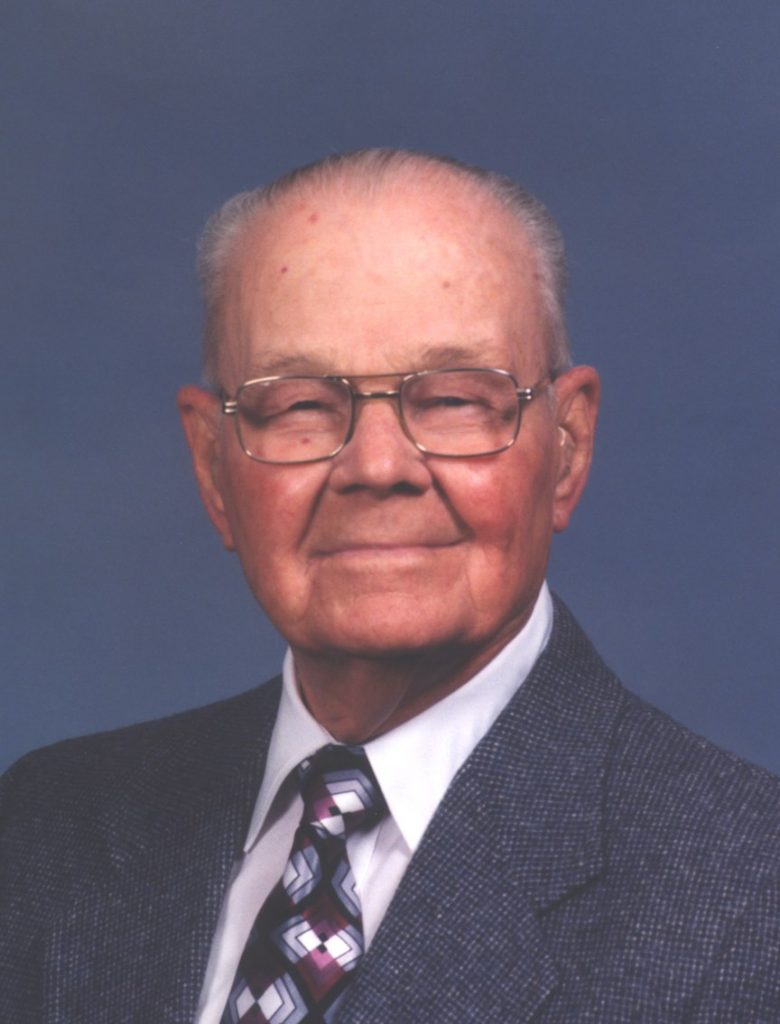 The Rev. Glenn O. Martensen, age 104, of Fenton, MO, passed away Monday, June 21, 2010 at Friendship Village South in St. Louis, where he had made his home the past 8 years.
Glenn O. Martensen was born on a farm in Prairie Grove, IA (near West Burlington) on April 6, 1906, the son of Cornelius and Katherine Schmidt Martensen.
On August 20, 1930 he was married to Katherine Kinsley in Rock Island, and had two sons, Daniel Glenn Martensen and Gay Allen Martensen. Each preceded him in death, Katherine on February 23, 1940, Dan on February 28, 2008 and Gay on June 16 of 2008. Katherine died while he was serving St. Paul United Church of Christ in Kahoka and there he married Aileen E. Plenge on August 20, 1944. To this union a son, Dean S. Martensen, was born in June of 1950. Aileen preceded him in death on May 30, 1994.
Besides his son, Dean Martensen and his wife, Sherri, he is survived by three grandchildren: Jacob Martensen, his wife, Debbie, their son, Alex, and expecting Baby 2 on June 30th, Jenna Saucier and her husband, Dwayne, their daughter, Savannah, and son, Zachary, and Kathy Martensen. He is also survived by daughter-in-law, Wilma Martensen, as well as many nieces and nephews.
During the year of his confirmation in 1920 in West Burlington, Glenn became interested in the ministry. He entered Elmhurst Academy in 1922 in St. Louis, graduating in 1926, and went on to attend and graduate from Eden Theological Seminary in St. Louis in June 1930. While at Eden, he was part of a traveling quartet that sang inspirational songs. He had many fond memories of this time, because at 5’6″ he was the bass vocalist and his roommate and best friend, 6’6″ John Schmidt was the tenor which delighted many audiences. Glenn was ordained into the Christian Ministry on June 15, 1930. As a full-time minister of 43 years, he served five parishes: June 1930-Oct 1936 Zion Evangelical Church in Primrose, IA and St. Peter’s Evangelical Church in Franklin, IA (shared ministry); Oct 1936-Aug 1945 St. Paul Evangelical and Reformed Church in Kahoka, MO and Zion Church in Winchester, MO (shared ministry); Sept 1945-Feb 1957 St. Lucas Evangelical and Reformed Church in Sappington (St Louis) MO; Feb 1957-Jan 1965 St. Mark United Church of Christ in Terre Haute, IN; Jan 1965-Dec 1972 Bethany Peace United Church of Christ in Spanish Lake (St. Louis) MO.
While serving as Pastor in Kahoka, Glenn attended NE Missouri State (Truman State), receiving his BA in Aug 1945. Shortly after moving to St. Louis, he received his Bachelor of Divinity from Eden Seminary in Dec 1945.
Following his retirement, Glenn and Aileen moved to Fenton, MO where he continued as Interim Minister for several St. Louis area churches until 1994. His final 8+ years have been spent at Friendship Village South in St. Louis..
His legacy will be the life-long example that he set for his family, friends and former congregations. He lived the life that he preached about. A life of love, happiness and laughter, superior honesty and integrity, and a true compassion for his fellow man. As a testimony to his life, he still received between 75-100 Christmas cards each year covering all 5 churches he served…many containing hand-written “thank you’s” for his past ministries. He will be terribly missed. St. Paul, Kahoka, was blessed to maintain a life-long relationship with him as he visited his many Plenge nieces and nephews in Clark County through the years.
Funeral services celebrating his life were held Thursday, June 24, 2010 at 10:30 a.m. at St. Paul United Church of Christ in Kahoka with Pastor Joel Schlatter officiating. Mrs. Ida Ross was organist and Mr. H L Plenge, vocalist. Special music was “How Great Thou Art” and congregational hymn “Great is Thy Faithfulness”.
Pallbearers were Jacob Martensen, Ralph Plenge, Jr., Hal Plenge, Henry Plenge, Gary Plenge and David Plenge.
Burial was in St. Paul Cemetery.
Visitation was held from 9:30 a.m. Thursday until time of services at St.. Paul.
Memorials may be made to Evangelical Children’s Home, 8240 St. Charles Rock Road, St. Louis, MO 63114 or left at St. Paul Church or Wilson Funeral Home..
Arrangements were handled by Wilson Funeral Home in Kahoka.
On-line condolences may be expressed at www.timeformemory.com/wilsonfh.