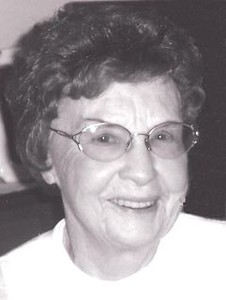 She was born January 7, 1930, at Knox City, Missouri the daughter of Lee O. and Velma M. Tonnies Mumford.

She was also preceded in death by her parents.

Eileen was a housewife and homemaker, she and her husband farmed in the Colony area for over forty years. She was also employed at the LaBelle Manor Care Nursing Home for thirteen years.

Eileen was a Member of the Rutledge Congregation of Jehovah Witness’s since 1940 and had never missed a meeting.  She loved cooking, playing the piano, poetry and spending time with family and friends.

Expressions of sympathy in memory of Ramona Eileen Trent may be made to Hospice of Northeast Missouri.  Memorials may be left at or mailed to Hudson-Rimer Funeral Home, P.O. Box 1, Edina, Missouri 63537.