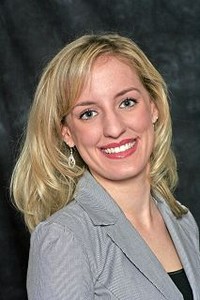 Abby was born September 30, 1986, at Wayne, NE, the oldest child of Mike and Sue Shepherd Scott.

Survivors include her parents, Mike and Sue Scott of Kahoka, MO; brother, Michael Scott, a cadet at the U.S. Air Force Academy in Colorado Springs, CO; a sister, Elsa Scott of Kahoka, MO; grandmothers, Lorna Shepherd of Ainsworth, IA and Arlene Scott of Fort Dodge, IA; aunts and uncles: Robert Shepherd and Tom Shepherd, both of Washington, IA, Bill and Kitty Shepherd of Knoxville, IA, Dick and Deb Shepherd of Washington, IA, Rick and Sue Scott of Otho, IA, Craig and Paula Scott of Hudsonville, MI, Cindy and Leo Frehse of Sturgis, SD; great uncles and aunts, as well as many cousins and other relatives.

Abby was planning to marry Patrick Kohler, of Belton, MO, in the future.

She was preceded in death by her grandfathers, Robert "Shep" Shepherd and Ernest E. Scott.

Education and the fine arts were an important part of her life. Before she was in grade school, she was involved in theater, music and drama as well as sports and academic activities.

She transferred to Clark Co. R-1 High School her senior year from Fremont, Nebraska when her parents purchased The Media in Kahoka. At Clark Co. R-1, she was a member of the Campus Bowl, Choir, Show Choir, Band, Tall Flags, Pep Band, Track and Cross-Country, Drama Club and recipient of the ACT Award.

At Fremont High School in Fremont, NE, Abby was active in Student Government, band and choir, and competed on the swimming and diving team. She enjoyed target archery and technical rock climbing. She also loved working with animals as a volunteer for the Dodge County Humane Society and through an Explorer program at the Henry Doorly Zoo in Omaha.

She was a 2004 Clark County R-1 Honor graduate and graduated from Southeastern Community College at Keokuk. Abby was currently a senior Political Science Major at Northwest State University in Maryville, MO, where she was also a member of the ROTC Sweethearts.

Abby was the Clark County Coordinator for the Big Bros. and Big Sisters and worked at the Clark County License Office when she was home. The past year, she had been employed by the Maryville Chamber of Commerce and License Bureau.

She was the 2003-2004 Old Settler’s Queen and the current Miss Northeast Missouri and competed in the Miss Missouri Pageant in June 2007. She was active in the Church of the Nazarene in Keokuk and participated in church choirs and theater since she was a little girl. She had been in several of the Great River Player productions in Keokuk.

Her family had a special love for each other.

Funeral services were held Saturday, November 24, 2007, at 10:30 a.m. at St. Paul United Church of Christ in Kahoka with Pastor Dana Jurgensen and Rev. Kenneth Beckmann officiating. Eulogist was Patrick Kohler. Mrs. Ida Ross was organist and Mr. H L Plenge, vocalist. Selections were "Adonai" and "I Believe". Additional music was "Think of Me" recorded by Sarah Brightman and congregational praise hymn, "Shout to the Lord".

Visitation was held after noon on Friday at Wilson Funeral Home with family receiving friends from 6-8 p.m. In lieu of flowers, memorials are suggested to the Abby Scott Memorial Scholarship, Great River Players, or Church of the Nazarene, Keokuk, IA.