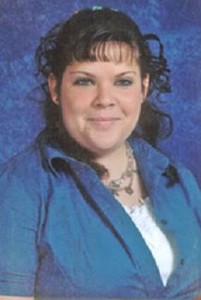 Halley was born on August 5, 1988, in Des Moines, Iowa, the daughter of John Charles and Candace Marie Humpal Fagin.

She moved with her family to Mesa, Arizona at the age of two years and attended school before moving to Edina, Missouri to live with her grandparents after her parent’s deaths. Halley graduated from the Knox County High School in the class of 2007 and had been employed by the University of Missouri Extension Office in Edina.

Halley was a member of the Christ is King Catholic Church in Mesa, Arizona.

She is survived by a brother, David and Tarah Fagin and their daughter Emma of Edina, Missouri; grandparents, Bill and Jan Humpal of Edina, Missouri, Lloyd and Diane Fagin of Perry, Iowa, and John and Connie White of Mesa, Arizona; a great grandmother, Marie Lindgren of Paton, Iowa; aunts and uncles, Larry and Stacie Kinman and their children Ashley and Taylor of Mesa, Arizona, Mary Fagin of Perry, Iowa, Brent and Renaye Lindgren of Paton, Iowa, Larry and Bunny Small of Tierra Verde, Florida, Greg and Annette Humpal of Appleton, Wisconsin, Carol and Bob White of Edina, Missouri and Allen and Jerry Davidson of Edina, Missouri; along with loving cousins, family and a host of friends.

An expression of sympathy in memory of Halley Fagin may be left to the Halley Marie Fagin Memorial Fund. A memorial may be left at or mailed to the Doss Funeral Home 208 N. 4th Street, Edina, Missouri 63537.