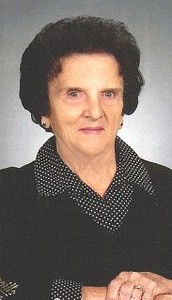 She was raised in rural Baring graduating from the Baring High School in 1939.  Verlee attended Kirksville State Teachers College, now Truman State University, and earned a teaching certificate.  She taught in rural one-room schools until her marriage to Maurice “Tom” Delaney, November 24, 1943.  After their marriage, she taught one full year at Baring School and then was a substitute teacher in Knox County Schools for almost 50 years.  She and her husband farmed, living southwest of Baring for more than 60 years.

She was interim postmistress for Baring in 1960.  She enjoyed community activities and working on the farm along side Tom.  Verlee rarely missed a family or church event.

She and her husband enjoyed traveling throughout the United States.

Visitation was Sunday, January 13, 2007, after 4 p.m. with the family receiving friends all evening.   A Christian wake service was held Sunday at 7 p.m. in the Hudson-Rimer Funeral Home in Edina, Missouri.

Expressions of sympathy in memory of Verlee J. Delaney may be made to the St. Aloysius Cemetery or the Special Care Unit at Loch Haven Nursing Home.

Memorials may be left at or mailed to Hudson-Rimer Funeral Home, P.O. Box 1, Edina, Missouri, 63537.