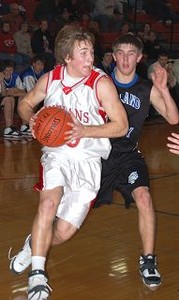 The Clark County Indians took on the Scotland County Tigers in a very important Tri Rivers Conference game at home on Thursday, January 31. The Tigers came to town with a very good ball club.
In the opening quarter Bryan Plenge had five points, Javis Vineyard added a three, Michael Brennan, Colt Sommers, and Scott McAfee each had a basket, and Clark outscored the Tigers 14-7 in the first quarter.
In the second quarter the Tigers post player, Cody Musgrove, was making a showing inside, and the Indians only outscored the Tigers 11-10 to lead at halftime, 25-22, thanks to a pair of threes by Ethan Allen, and a three and a two by Bryan Plenge.
In the third quarter Bryan Plenge hit another three and a two, as he did in all three quarters.  Sommers added five, but the Indians could not hold off the Tigers, 15-12, but still led after three quarters, 37-32.
The fourth quarter was a barn burner, as both teams were scoring about every trip down the floor, but the Indians saw Plenge add another six, Sommers and Brennan had four each, and Clark County held on 16-15, and walked away with the big conference win 53-47 over a very good Tiger team.
Leading the Indians was Bryan Plenge with a game and season high of 21 points, followed by Colt Sommers with 11, Michael Brennan added eight, Ethan Allen had seven.  Javis Vineyard and Scott McAfee had 3 each.
The Indians are now 13-5 on the season, and 5-0 in Conference play. They have Milan on the road and North Shelby at home remaining in Conference play.