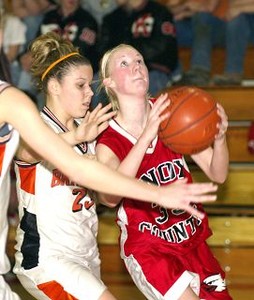 Knox County jumped out to a 19-4 lead early in the second quarter of a non-conference home game with Brashear. The January 28, contest saw the Lady Tigers (8-9) move within three points of the Lady Eagles (9-8) in the fourth quarter.
Lorrie Peters sank a key KCHS bucket followed by another offensive connection, staving off the determined Lady Tiger rally for a 42-34 Knox County win.
Knox County pressured the Brashear ball handlers into 16 turnovers and 12 KCHS steals on the evening. Knox County averages 13.5 steals per game with their ball-hawking defense. Pressure on the defensive end prevented Brashear from scoring a first quarter field goal.
Knox County got three pointers from Tessa Ramer and Stacey Leckbee during period one. The Lady Eagles powered to a 16-4 first quarter edge. Stacey Leckbee was open on the right wing and buried a KCHS three ball just into the second quarter for the 19-4 Lady Eagle lead.
Brashear fought back and outscored Knox County by a field goal the remainder of the second quarter. Knox County held a 25-12 halftime lead.
The Lady Tigers made adjustments in the second half. Brashear evened their hosts with 12 points each in the third period. Tessa Ramer tossed in a KCHS home run ball. Stephanie Elsea matched the Lady Eagle bomb in period three. Knox County led 37-24 after three periods of play.
Brashear rallied and outscored Knox County 10-5 in the fourth quarter. Stephanie Elsea connected on another Brashear three ball. The Lady Tigers posted up six foot senior Hailee Kelsey, who scored a game high 14 Brashear points.
Kelsey was 12-14 from the charity stripe for all of the Lady Tigers’ free throw tries during the game. Knox County had a good night from the line, scoring on seven of their ten chances. Both sides sank 3-4 fourth quarter free throws.
The Lady Tigers received bad news when Christina Scudder was found to have a torn ACL in her knee. Scudder will miss the remainder of the basketball season and will be unable to participate in her senior track season.
The Adair County R-II honor student and four time all Tri-County Conference selection in softball, track and basketball plans to attend Southeast Missouri State University on an academic scholarship Scudder was averaging double figures in scoring and rebounds before her injury.
The Tiger boys’ injury situation improved when senior Jacob Shipman was medically cleared to practice. Shipman is expected to be able to play during the Brashear Tournament.
"We focused everything around the personnel we had," said Brashear coach Sara Williams. "When you have seven varsity players, and now you are down to six it is quite an adjustment. "
"I thought the girls battled back," said Williams. "They didn’t lay down and die. We didn’t have a very good (North Shelby Tournament) first round match up with Knox County. I felt like we held our composure better this game. We were able to hold their scorers down."
"The girls played hard and did what they needed to do," said Sara Williams. "We just need to fine tune, and get some things going back our way."
Knox County had an overall height advantage, and pressed the edge for a 32-19 rebounding victory. The Lady Eagles took care of the ball with ten turnovers and two BHS steals. Brashear dished out nine assists.
Hailee Kelsey led the Lady Tigers with seven rebounds and as many assists. Stephanie Elsea and Jessi Hill scored eight Brashear points each. Emily Ladwig and Caroline Slavin scored two Brashear points each.
Knox County sank five three pointers and Brashear two on the night. The Lady Eagles were held down offensively by a tough Brashear defense, but had good scoring balance.
Three Lady Eagles scored eight points. Tessa Ramer and Lorrie Peters scored eight points each. Stacey Leckbee tossed in eight KCHS points to go along with five assists. Amanda Woods scored seven Knox County points and pulled down seven rebounds.
Becca Mallett scored three Knox County points. Katie Ausmus scored three points and had three steals. Myra Parrish and Amber Ausmus scored two points each. Caley Palmer added one KCHS point.
"We started with a lot of ball pressure out on the perimeter," said Knox County coach John Weaver. "Defense was the difference for us. We were able to get them out of what they wanted to do on offense. If we continue to play defense like we did tonight, we will be just fine down the stretch."
Brashear enters their February 4-9 tournament seeded first on the girls’ side. Marion County is the two seed followed by Knox County, North Shelby and Novinger.