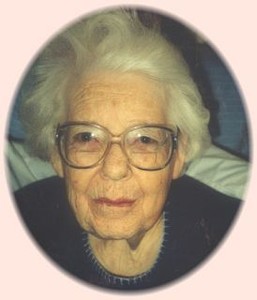 She was born September 21, 1918 at Sarben, NE, the daughter of William and

Survivors include her only child, Verna Baker and her husband, James, of Kahoka, MO; three grandchildren: Denise Kruse of Eagan, MN; Leonard Baker of Wayland, MO, and

She was preceded in death by her parents; her husband; and a brother, Cecil Osborn.

Blanche lived most of her life in Nebraska where she was a housewife and farm wife.

She was a member of the former Peace Lutheran Timber Creek Church in Belgrade, NE, and a

true Cornhusker fan. She and Fred moved to Houghton, IA in 1982 to be near her daughter and son-in-law and their family and following Fred’s death, Blanche lived in Argyle and eventually in the Clark Co. Nursing Home in Kahoka where she could be closer to Verna. She was always an excellent cook and was known for her Sunday dinners of fried chicken with mashed potatoes and gravy and raisin cream pie. In later years she really enjoyed watching TV, particularly

Wheel of Fortune, Bob Barker and other game shows and soap operas. She also enjoyed doing crossword puzzles. Family was always the most important thing in her life.

Graveside services were held Saturday, March 1, 2008, at 10:30 a.m. at Belgrade Cemetery in Belgrade, NE. Visitation was held from 5-7 p.m. Friday, February 29, 2008, at the Palmer Funeral Home in Fullerton, NE. Memorials there were suggested to the Belgrade Cemetery.

On-line condolences may be made to the family at www.timeformemory.com/wilsonfh.