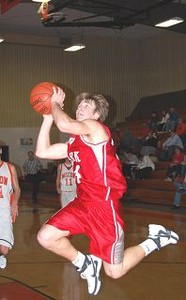 The Clark County Indians opened their Class 3 District 7 playoffs Monday, February 25, at Palmyra, as they were matched with the Macon Tigers, which was their first meeting this year. The winner will play the number one seed on Wednesday, February 27, the Highland Cougars.

In the opening quarter Bryan Plenge pumped in 6 points, Colt Sommers added 4, but Macon took the quarter, 16-15. Sommers and Plenge got into foul trouble, which did not help the Indians.

The second quarter saw the two teams play even at 10 each. Scott McAfee led with a three, the half ended at 26-25 Macon.

The final quarter was the only quarter the Indians took. Ethan Allen added a pair of threes, and Michael Brennan added 4. The Indians took the quarter, 16-15, but the Macon Tigers ended the Indians hope to advance, as Macon took the victory, 59-54.

The Indians closed their season 16-8, but took their conference 7-0.

Clark County  was led by Colt Sommers with 14 points followed by Bryan Plenge with 12, and Javis Vineyard and Ethan Allen had 9 each, Michael Brennan had 7, and Scott McAfee added 3.

The Indians say goodbye to four seniors who played their last game as Clark County Indians, and they are: Colt Sommers, Scott McAfee, Tim Otte, and Ryan Plenge.