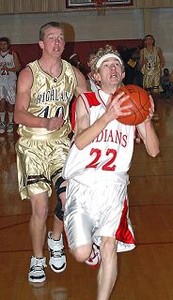 Indians Shock Cougars On Senior Night
By Herb Butler
The Clark County Indians made Senior Night a night to remember as they hosted the Highland Cougars on Tuesday, February 19.  The last time these teams met, the Cougars handed the Indians a 20-point loss, but tonight would be different as the Indians knocked of the ninth-in-the-state ranked Cougars.
Coach Clint Smith started all four seniors–Colt Sommers, Scott McAfee, Ryan St. Clair and Tim Otte, and the Indian seniors showed they weren’t intimidated by Highland’s ranking.  Colt Sommers scored eight first-quarter points to lead the Indians to an 11-7 lead after one period.
Michael Brennan stepped up the scoring in the second period, scoring 10 of the Indian’s 14 points, and the crowd was buzzing as the Indians went to the locker room with a 25-16 halftime lead.
Highland came out in the third quarter and fed Kyle Ellison on the outside, and he buried four three-points to bring the Cougars back into the game, but momentum shifted back to the Indians as Sommers tipped in a McAfee shot at the buzzer, and after three, the Indians held a 37-31 advantage.
The Indians had decided this was their night, and they proved in to the Cougars in the final quarter as six Indians scored, led by McAfee with seven, while Brennan and Javis Vineyard added four each in the Indian’s 59-50 upset of the Cougars.
Michael Brennan led the Indians with 18 points, Colt Sommers put in 17, and Scott McAfee and Javis Vineyard had eight each.  Ethan Allan scored six and Bryan Plenge had two points.
Four seniors played their final home game, and we wish Colt Sommers, Scott McAfee, Ryan St. Clair and Tim Otte good luck.