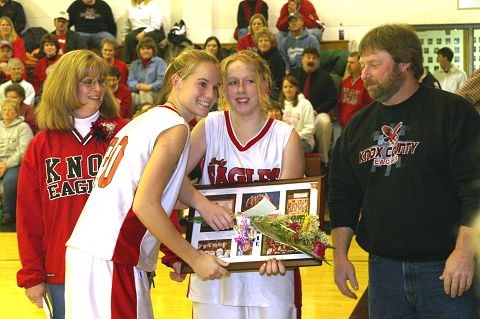 By David Sharp
The first half of Knox County’s girls Senior Night game with Atlanta appeared to be more of the same. The Lady Eagles entered February 21, 2008 play on a five game losing streak. The home team missed nine of ten free throws in the first half. They appeared tentative and flat.
Their opponents came out fired up and grabbed a five point second quarter lead.
Knox County shots came up short of the mark frequently in the first half. Neither team played particularly well in a first two quarters led 14-11 by the Lady Hornets.
First year Knox County coach John Weaver and his team found the fire that led the Lady Eagles to wins in six of their seven games prior to their most recent skid. Knox County dominated the second half and took a convincing 59-26 victory.
The teams stumbled through the first quarter. Knox County led 6-5 after one period of play. Atlanta (7-17) cracked off a six point run and led 11-6 on a Tricia Pore basket at the 7:03 mark of the second quarter.
The Lady Eagles held a size advantage and did a good job on the boards most of the contest. The Lady Hornets were without post player Beth Voss due to a knee injury.
Knox County may have lost one of their best young players to a similar injury. Freshman Amber Ausmus leaped for a rebound and crashed to the court near the center of the lane at the 5:30 mark of the second quarter.
The accident led to a left knee injury. Ausmus did not return to the contest and was observed using crutches after the game.
If she is unable to play in upcoming district games, the Lady Eagles will have to make up the six to ten points per game their talented young forward has been producing.
Atlanta was ahead 11-9 at the time. Becca Mallett muscled her way to a rebound and tied the game at the 3:52 mark of period two. Tiffany Watson sank a Lady Hornet free throw and Tricia Pore sank a field goal with two minutes remaining until intermission.
The fire in several Lady Eagles’ eyes was apparent when they came out for second half warm-ups trailing 14-11 on the Knox County Senior Night. What followed was a quick, devastating wave of domination.
Tessa Ramer took the basketball and gave Knox County a 15-11 lead very early in the third quarter. Knox County defenders began swarming all over anyone that held the basketball wearing a blue uniform.
Lorrie Peters hammered home a three shot offensive rebound opportunity for a 17-14 lead. Peters stole the ball and scored, capping a ten point run with 5:03 showing on the third quarter clock.
Tiffany Watson sank an Atlanta free throw with 4:37 remaining in the third quarter making the score 21-15 Knox County. The Eagle varsity boys were watching the Lady Eagles shine on the north end of the gym.
Tessa Ramer scored, then stole the ball and scored again in a 17 second period for a 25-15 lead. Katie Ausmus took the ball to the rack and put Knox County up 29-15 with 1:59 to play in the third quarter.
The near capacity crowd probably didn’t have a chance to process the 18-1 Knox County scoring run they had just witnessed. Tiffany Watson sank two more Lady Hornet free throws. Tessa Ramer answered with a KCHS free throw for a 30-17 lead with 1:33 until the final break.
Knox County attacked the glass again. Amanda Woods powered home an offensive rebound with two seconds remaining in the third quarter. When the smoke lifted, Knox County had outscored their guests 25-5 during the third quarter and led 36-19.
The Lady Eagles took better shots during the second half. Everything turned the home club’s way during the final 16 minutes. "The coach (John Weaver) said ‘I’m not mad, I’m just disappointed,’ at half
See KC Girls, Page 12
KC Girls–Continued From Page 14

time," said Knox County senior forward Jessie Stout.
"(Coach Weaver said) you have played so much better than this. This is your last game here. Go out and do it for your seniors and do it for yourselves," commented Knox County’s four year high school girls’ basketball player. "We made our statement and did our thing," said Stout.
"Defense is usually our strongest point," said Jessie Stout. "We went out and just did it. This has been a good year. These girls have done great. It’s great to have a coach that believes in Knox County."
Knox County sent in several fresh players, including seniors Jessie Stout and Caley Palmer. Different players, same result. The Lady Eagles attacked the shell shocked Lady Hornets anew.
The Lady Eagles dominated the boards and smothered defensively. Post player Becca Mallett tossed in a 16 footer for a 41-19 lead just under 40 seconds into the fourth quarter. Six different Knox County players scored fourth quarter points.
Knox County cracked off a 17-2 run capped by Becca Mallett’s put back at the 3:13 mark of the final period. Knox County held a 53-21 lead. KCHS track star Lorelei Schlueter tossed in a 17 foot jump shot for a 57-26 lead with 53 seconds showing on the now continuously running clock.
Caley Palmer closed the scoring with 30 seconds to play in the game. Knox County hung 23 points on the board in the fourth quarter despite the running clock. The 23-7 fourth quarter run added up to a 48-12 second half scoring surge to the 59-26 victory.
Knox County improved to 11-13 on the season. "The second half was fun. I told the girls that this game was truly a tale of two halves," said Knox County coach John Weaver.
"I don’t think we could have played any worse in a single half, or played better in another half," said Weaver. "I thought we came in prepared and had a good game plan. Our shooting has been off. Luckily, our pressure defense came through. Our kids stepped up and took shots."
"I can’t really name one player who was outstanding. Everybody contributed in the second half," said Coach Weaver.
"We sent our seniors out on a good note. I have got a lot of respect for (Jessie Stout and Caley Palmer). I know they haven’t played as much as they wanted to with all the talent underneath them. They worked hard. They have contributed all season. I’m proud of everybody."
Both teams sank nine of 20 free throws on the night. Knox County tossed in 25 field goals while allowing only seven defensively. Five Lady Hornet two pointers came in the first half. Tiffany Watson sank a fourth quarter three ball for Atlanta.
Tricia Pore led the Lady Hornets with ten points. Tiffany Watson was next in line for Atlanta with seven points. Knox County players greeted Atlanta head coach Amanda (Miller) Livingston with hugs and affection after the contest.
Coach Livingston and the current Lady Eagle freshmen and sophomores won ten or more Middle School games in each of the last two seasons. Livingston was not rehired by the Knox County R-I district as a teacher and moved to the Atlanta school district this year.
"I saw the girls I have worked with do what they could and be successful," said Coach Livingston when asked how it felt to return to Knox County as a coach. "We have one of our best girls out hurt. That effects us mentally," said Livingston of the loss of Beth Voss to a torn ACL.
"We came to play in the first half, and in the second half we didn’t," said Coach Livingston. "We have had minutes where we slack off this year, but never that many. We have the ability to play. We just have to get it in their heads."
Ten of the 12 Knox County players dressed for the contest scored. Tessa Ramer scored a game high 12 points in three quarters. Amanda Woods was in double figures with ten points. A look at the KCHS score sheet screams balance.
Becca Mallett scored nine points, seven in the fourth quarter. Lorrie Peters hammered home eight points in three quarters of play. Katie Ausmus scored six second half points.
Seniors Jessie Stout and Caley Palmer scored four points each. Brittney Miller, Stacey Leckbee and Lorelei Schlueter added two points each. Knox County goes into district play fifth seeded. The Lady Eagles challenge 2007 district finalist Marceline in the first round.
"Everybody has contributed. We are 11-13 and nobody is satisfied. That’s what is exciting to me," said Coach Weaver of one of the best Knox County varsity girls’ basketball seasons since their last over .500 season in 1995-96.
Current Novinger head coach Charlie Jennings had two winning seasons in 1994-95 at 14-13 and the 13-12 campaign in ’95-96. The Lady Eagles went 18-9 under Donnie Campbell in the 1993-94 season.
"We have 11 wins and we know we can do better," said Weaver. "This is just the momentum builder we need going into districts."