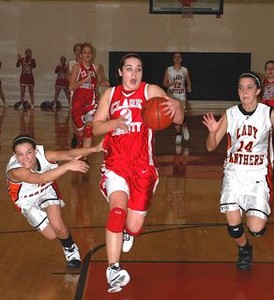 The Clark County Lady Indians have been plagued by  the Palmyra Lady Panthers all season, and Thursday’s district semifinal matchup would prove no exception.
Both teams played a balanced game in the first quarter, as Palmyra led 11-9 after the first.
The Lady Panthers jumped out to a 19-13 lead in the second quarter, but the Lady Indians battled back to within one point, 21-20.  However, Palmyra took the momentum back and extended its lead at halftime to 5 points, 27-22.
Clark County had a strong third quarter, scoring 15 points and cutting the Lady Panther lead to only two going into the final eight minutes.
The Indians tied the game in the fourth, but missed opportunities to take the lead.  Trailing by two with 21 seconds, the Lady Indians got the ball, but were called on an over-and-back violation.  They fouled Palmyra’s Sam O’Brien on the inbounds pass, and she made both free throws for the 49-45 win.
Kassidy Shuman led the Lady Indians with 15 points, while Daryle Goldie had 14.  Amanda Winters had eight, and Brittany Logsdon and Megan Wilson scored three apiece.  Brenna Buford added two to the total.
The Lady Indians closed their 2007-08 season with a 17-8 record.  Three of those losses were against Palmyra.