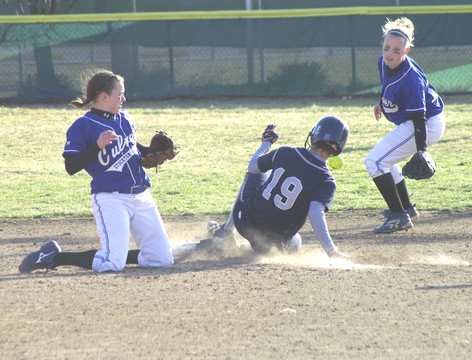 Columbia College senior Katie McMahon was named the 2007 Women’s Intersport Network Columbia, Missouri area Collegiate Sportswoman of the Year.
Katie McMahon earned NAIA Honorable Mention All-American recognition after being named American Midwest Conference Pitcher of the Year in 2007.
Finalists for the WIN 2007 Collegiate Athlete of the Year award were soccer player Mallory Frost and gymnast Adrianne Perry of the University of Missouri at Columbia.
Columbia College won their Regional softball tournament in 2007. Katie McMahon began the season at shortstop and earned the Cougar’s number one pitching job by striking out 162 batters with a 1.39 ERA last season.
The WIN Collegiate Sportswoman of the Year Award criteria includes demonstrating superior athletic achievement in their sport during the past year.
School and community involvement, outstanding spirit as well as a commitment to a healthy, active lifestyle are the listed criteria. Nominees had to reside, work or compete in Columbia, Missouri or the surrounding area.
“I was excited to receive the award,” said Knox County R-I alumni Katie McMahon. “It was good to represent my team and school.” Katie McMahon was a Class 2 softball all-stater at Knox County High School. She was a member of the Lady Eagles’ 18-3 softball team in 2004.
Knox County lost by a 1-0 score to eventual state champion Putnam County in the district championship. Katie played at Columbia College with her sister Marcie McMahon, who completed her college softball eligibility in 2007.
Columbia College won their first five softball games this season. Katie McMahon was the winning pitcher in two of those contests. Katie’s parents are Denny and Kathy McMahon of Edina.