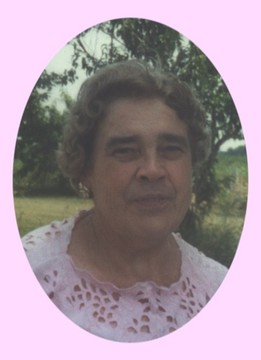 ELEANOR NICHOLS
Eleanor Nichols, age 95, of Kahoka, MO, died Friday, May 2, 2008, at the Clark Co. Nursing Home in Kahoka.
She was born October 31, 1912, near Williamstown, MO, a daughter of Milton and
Sydney Wadmore Walker.
She married Charles Edward Nichols on June 11, 1932, at the Neeper Christian Church. He preceded her in death on August 6, 1991.
Survivors include four grandsons: Matt Greek and his wife, Carol, of Houston, TX,
Milton Greek and his wife, Constance, of Athens, OH, Charles Nichols of Oak Grove, MO, and Chris Nichols and his wife, Kelly, of Oak Grove, MO; a granddaughter, Elizabeth Nichols of Oak Grove, MO; three great-grandchildren, Ben Greek and his wife, Lauren, of Pensacola, FL, Andy Greek of Houston, TX, and Emily Nichols of Oak Grove, MO; also several nieces and nephews and other relatives.
She was preceded in death by her husband; two daughters, Elaine Greek and Judith Joy Nichols; a son, Charles Walker Nichols; three grandsons, Marcus Greek, Jeffery Nichols, and Michael Frederick Nichols; a brother, Cecil Walker; and two sisters, Greta and Mabel Walker
Eleanor graduated from Culver Stockton College and Kirksville State Teacher’s College.
She taught in several rural schools, her first year at Nichols School on the Lewis/Clark Co. line. It was there that she met her future husband, Charles. The next two years were spent at Brush College until her marriage in June of 1932. During World War II, she was called back to teach by the Superintendent. She taught a total of 36 years, including Antioch, St. Francisville, Gravel Hill, Gem, and back to Gravel Hill. She retired from the Clark Co. R-1 School District,
spending the last of her school years as a 6th grade teacher at Blackhawk Elementary. She was a firm believer of teaching with discipline, but more important, love.
Eleanor was a member of the Kahoka Christian Church and of the 50-50 class. She was a member of Kahoka Chapter # 40, O.E.S., a former Worthy Matron, and had just been presented her 50-year pin. She was also a staunch Democrat.
She loved to garden and filled her yard with beautiful flowers. She enjoyed sewing, embroidering, genealogy, and reading. She was also a collector. Her heart was filled with love for her children and their families.
Funeral services were held Tuesday, May 6, 2008, at 10:30 a.m. at the Kahoka Christian Church with Rev. Dick Clifford officiating. Mrs. Virginia Brammer was organist. Special music was congregational hymns “”Jesus Savior, Pilot Me” and “Beautiful Isle of Somehwere”.
Pallbearers were Andy Greek, Ben Greek, Chris Nichols, Matt Greek, Milt Greek and Charles Nichols.
Burial was in the Neeper Cemetery, rural Kahoka.
Visitation was held at Wilson Funeral Home in Kahoka after noon on Monday with a public Eastern Star service being conducted at 6 p.m. followed by family receiving friends until 8 p.m.
Memorials were suggested to the Neeper Cemetery or the Kahoka Christian Church.
On-line condolences may be expressed at www.timeformemory.com/wilsonfh.