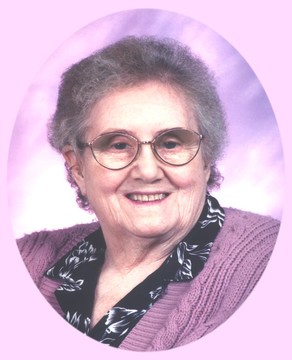 VIRGINIA L. HOPP
Virginia L. Hopp, age 90, of Kahoka, MO, died unexpectedly Tuesday, April 29, 2008, at the Clark Co. Nursing Home in Kahoka where she had been a resident since August 11, 1991.
She was born April 20, 1918 in Wyaconda, MO, the only daughter of Marvin and Pinkie Barnes Feigenspan.
She and Cecil M. Hopp were united in marriage on November 2, 1940, in Kahoka. He preceded her in death on July 21, 1990.
Survivors include a sister-in-law, Claris Kraus of Arbela, MO; a brother-in-law, Calvin Kraus also of Arbela, MO; and numerous nieces and nephews.
She was preceded in death by her parents; her husband; two brothers, Noble and
Eugene; and brothers-in-law and sisters-in-law, Wayne and Norma Bogener, Karl Kraus,
Cleatus Kraus, Eldred and Estelle Herring, George Hopp, Jr., Beatrice Hopp and Zola and
Woodrow Miller.
Virginia graduated from Wyaconda High School and Kirksville State Teacher’s College.
She taught in many rural Clark County schools prior to her retirement in 1978 from Running
Fox Elementary. She was a member of the Missouri and Clark Co. Retired Teachers.
Virginia was a member of the First Baptist Church in Kahoka. Her faith was very important to her and she attended as many of the services held throughout the week by various churches at the nursing home. She used her confinement at the nursing home to share her faith and help others know the salvation and grace through Jesus. She loved to participate in the many activities of the nursing home and loved to read. She enjoyed collecting school bells, pins and angels.
Funeral services were held Friday, May 2, 2008, at 10:30 a.m. at Wilson Funeral Home in Kahoka with Rev. Dan Deatrick officiating. Mr. John Spray was vocalist with selections “In the Garden” and “Till the Storm Passes Over”.
Pallbearers were Gary Bogener, John Waddell, Larry Alderton, Chuck Nelsen, Steve Howell and Buddy Kattelman.
Burial was in the Bethlehem Cemetery.
Visitation was held after 11 a.m. on Thursday with family receiving friends from 6-8 p.m.
Memorials were suggested to the Kahoka First Baptist Church.
On-line condolences may be expressed at www.timeformemory.com/wilsonfh.