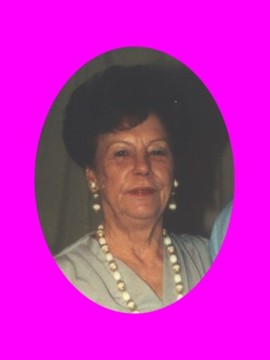 She was born August 3, 1924 at Morganton, NC, a daughter of Vernon L. and Annie May Powell.

Survivors include her step-father, Lewis Watts of Hickory, NC; two brothers, Rev. Marion Powell and his wife, Sylvia, of Newton, NC, and Bobby L. Powell and his wife,Barbara, of Lenoir, NC; two sisters, Mildred VanDyke of Hickory, NC and Betty Berry of Taylorsville, NC; brothers-in-law and sisters-in-law: Alvin E. Ayer and Maxine Strickler, both of Kahoka, MO and Marie and Lowell Nichols of Luray, MO; caregiver and friend, Peggy McGee of Wayland, MO; also nieces and nephews including Sheila Wood and family of Kahoka and Herley Ayer III and family of Oklahoma City, OK.

She was preceded in death by her parents and husbands, Herley Ayer, Jr. and Carol Ayer.

Vera worked in various clerical and retail capacities through different moves associated with Carol’s career in the military service. Following his retirement, they settled in Missouri where she spent her time as a housewife.

Funeral services were held Friday, May 23, 2008, at 2 p.m. at Wilson Funeral Home in Kahoka with Rev. Marion Powell officiating. Special music, “Amazing Grace, My Chains are Gone” was provided by Summer Wood, vocalist, and recordings “It is Well” and “How Great Thou Art’.

Visitation was held at Wilson Funeral after 9 a.m. on Friday with family receiving friends one hour prior to services. Memorials were suggested to Blessing Hospice (Hancock County).