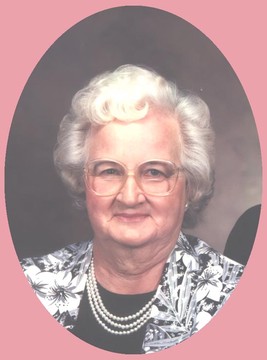 She was born June 21, 1929 in Van Buren County, Bonaparte, IA, a daughter of Roy A. and Bertha Edna Gibbs Parker, one of nine children.

She was preceded in death by her parents; three sisters; four brothers; a step-son, William “Bill ” Spory; two sons-in-law; and a great-grandson.

Grace was a housewife and companion. She was a faithful member of the First Baptist Church of Kahoka as long as her health permitted. She was blessed at the age of 60 with her marriage to Roger who said “her cooking got to his heart”. They had a one-of-a-kind relationship and a good marriage for both. She considered Roger the love of her life and her own special Angel. She loved to crochet, loved cardinals and riding horses. Her friends and family were most special to her.

Funeral services were held Tuesday, July 15, 2008, at 2 p.m. at Wilson Funeral Home in Kahoka with Rev. Matt Hoffman officiating. Mr. Marvin Cook was vocalist with special music “I’m Using My Bible For a Road Map” and “And the Roses Never Fade”.

Visitation was held at Wilson Funeral Home from 4-6 p.m. Monday and after 9 a.m. Tuesday with family receiving friends Tuesday from 12:30 until time of services.