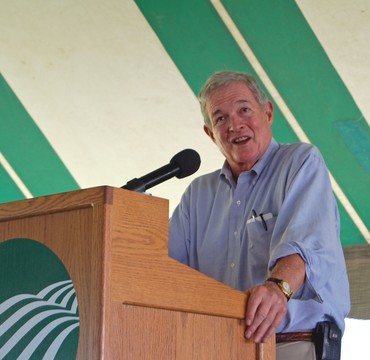 Bond:  Time To Get Real On Energy

“I understand what a key role the electric cooperatives play in the lives of rural Missourians,” Bond said.

Bond noted that Missouri families are struggling with record gas prices at the pump, and that energy costs for their homes were rising sharply. He emphasized that any plan that has a chance to lower gas prices must both find more energy and use less.
“It’s time to get real about solving this problem,” Bond said. “We can produce enough energy in an environmentally friendly way,” Bond stated.

He noted that there are 18 million barrels of oil off America’s Atlantic and Pacific shores, which could supply up to ten years worth of oil for the country. Opening those offshore fields to development would immediately cause the price of oil to fall, as speculators will see America is serious about tapping new supplies.

“We have oil shale fields in Colorado that hold more oil than Saudi Arabia. We have 250 years of coal. “We can get more from wind, geothermal, solar and nuclear power,” Bond said.

“We don’t have enough battery manufacturer’s to meet the coming demand,” Bond said, noting he would like to see those manufacturers located in Missouri.
Bond also stated the need to end excessive speculation, but at the same time avoid making prices at the pump worse with tax hikes or lawsuits against countries.

“Can you tell me just one time where taxing something resulted in there being more of it?” Bond asked the audience.

Tax hikes have never produced more of something or lowered prices, and suing oil countries will just force them to take their oil to other countries like China, Bond stressed.

“Keeping your tires inflated is a good idea, but only saves six to twelve gallons a year,” said Bond. “For the long-term, we need a comprehensive plan that relies on many forms of energy.”