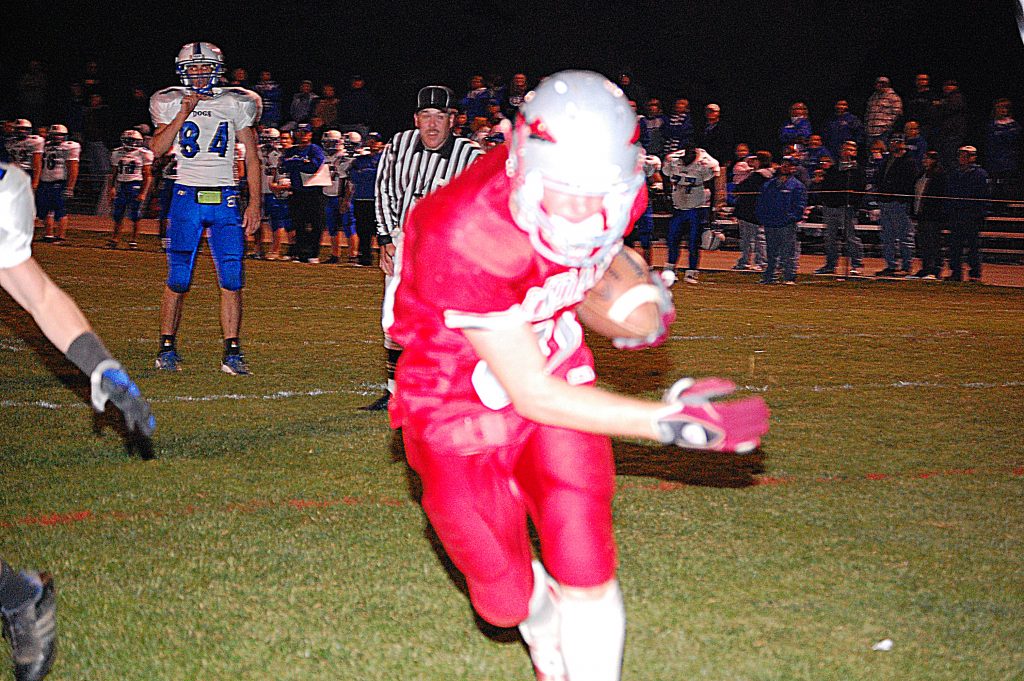 Clark County’s seniors redefined “Senior Night”, Thursday night, and in the process showed why they’re the best team in the area, putting on an impressive offensive display against their perennial adversary, the Brookfield Bulldogs. The game was for the conference and district championship, and the Indians came ready to play.

Clark County won the coin toss, and elected to receive to start the game. Senior Matt Morrow took the kick return 89 yards through the Bulldog defense, barely staying on his feet at one point, for a quick Indian touchdown. The extra point kick missed, and the Indians led 6-0 just 15 seconds into the game.

Senior Bryan Plenge fielded the punt on the 14, and raced 86 yards for a second Indian TD with 9:54 on the clock, and Clark County led 12-0 without their offense taking the field.

Brookfield managed to get the ball to midfield before senior Lynn William’s back-to-back sacks drove the Bulldogs back to the 26 before they were forced to punt. Senior Javis Vineyard called a fair catch, and Clark County’s offense took the field on the 35-yard line. The Indians moved the ball across midfield before Vineyard broke free for a 48 yard TD run. The two-point conversion pass from senior QB Ethan Allen to Morrow gave the Indians a 20-0 lead with 6:06 left in the first quarter.

Clark County got the ball back again a little over a minute later, as their powerful defense forced yet another Brookfield punt. The Indians moved into Bulldog territory before Allen scampered 39 yards for Clark County’s fourth TD of the quarter. The two-point conversion was good, and the Indians led 28-0 with 3:59 left in the first.

Seconds later, the Indians would get the ball again recovering a fumble on the Bulldog 16 yard line. This time, the Indians would score on 16-yard pass from Allen to senior Ethan Horton. Vineyard ran in the two-point conversion, and Clark County led 36-0 with 3:41 left in the first.

For those of you keeping track, that’s five TD’s by five different seniors in the first quarter.

The Indians would get the ball back late in the quarter, taking a Bulldog punt on their own 39. The Indians quickly moved in to Brookfield territory, and scored on a 20 yard pass completion to Plenge with just 44 seconds left in the quarter to take a 42-0 lead.

Clark County scored again at the 7:28 mark in the second quarter, this time by Allen on a 4-yard run. Senior Kolt Kiger’s PAT kick was good, and the Indians led 49-0.

Brookfield came back, mounting a solid offensive drive. The Bulldogs banged their way to the Indian 16 yard line before Aaron Sprouse became the first player to score against Clark County since the first game of the year, scoring on a 16 yard run. Senior Michael Brennan blocked the extra point kick, and Clark County led 49-6 with 3:20 left in the half.

The Indians started their next possession on their own 32. The Indian’s offense moved the ball up field before Vineyard scored his second TD of the night on a 28 yard run with just 50 seconds left in the half, give Clark County a 55-6 halftime lead.

The Indians had a running “mercy rule” clock during the second half, as a worn-out Brookfield varsity squad matched up against a mostly-fresh Indian reserve team. The Indians drove as deep as the Brookfield 19 before stalling, and Brookfield had the opportunity to score as two defensive penalties against Clark County after the final buzzer gave them excellent field position. But the Bulldogs’ attempt at a late score failed, and they faced a long bus trip home, knowing their season was over.

The Indians finish the regularly scheduled season 10-0, and district’s 3-0

The Indians will play South Shelby in regional action next Wednesday, at the CCR-1 Activity Field.